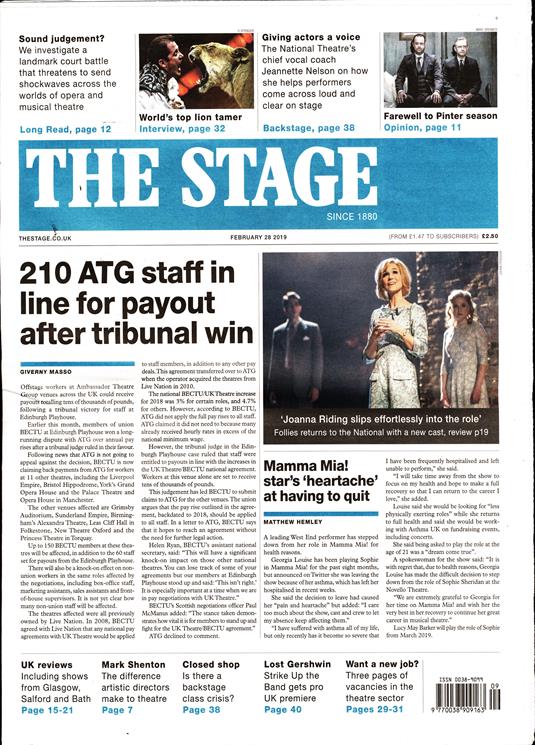 Sometimes we need to make fresh starts in life. And these days, no job is for life (even Robert Mugabe was eventually ousted). 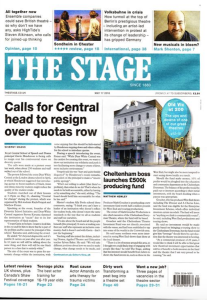 Today I’m making a fresh start in my life: after nearly 20 years of being closely associated with The Stage , my final regular column has just run online here today [and will be in the print edition tomorrow]. I began writing regularly for it in 2002, soon after I first went freelance; and then for some thirteen years (from 2005 to 2018), I was the first of The Stage’s columnists to write a daily weekday column (a blog by any other name) for its website, before one of them a week also ran in the paper itself. I was also variously the paper’s joint chief critic then New York critic, and Associate Editor.

Next year The Stage will celebrate its 240th birthday. Contrary to rumour, I have not been there since the very beginning. I’m proud of my own small part in its storied history, and I will continue to file occasional features or columns for the paper. But I will no longer have my own professional identity wrapped up in theirs — or vice versa.

There’s an inherent danger when that happens for both parties: your voice loses its independence, and some readers may mistakenly believe you represent the paper at all times.

So, looking to the future, you will, of course, continue to find my reviews after most major London openings at londontheatre.co.uk. For those that might have missed the announcement, I will  also now be contributing to its New York sister site at newyorktheatreguide.com. And, I will plan to post more regularly here on my own website shentonstage.com, developing it as a destination in its own right. 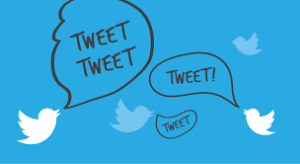 This month also happens to be my Twitterversary — it’s ten years since I joined the social media platform. It has certainly been a mixed blessing: on the one hand, I’ve grown a strong following (I’ve got nearly 44,000 followers now: not massive by celebrity standards, but decent enough for a specialist journalist).  I’m grateful to my followers for their support, their open discussions and their own thought-provoking  comments. At its best, it can also be a lovely supportive place — not least when my mother died last November, and I documented our final days together there. It felt very powerful to share some of these private moments publicly — I didn’t feel so alone, but also I feel I played my own small part in dispelling some of the taboo and secrecy around death.

On the other hand, it is a place that causes regular tensions, both personal and professional. Grievance now seems to be the dominant mood there; and grievance about grievance fuels it. I know I’ve been guilty of this, too, from time to time; I’m also committing today to a more positive outlook and frame of reference there, and I hope that Twitter will once more also act as a forum for healthy debate — based on facts or informed analysis, not just opinions.

For journalists, it is a valuable platform for being able to communicate directly with readers and to help to navigate them through a sea of voices to our copy. (And Twitter can also be a great source to find material for that copy). But of course it is not a channel we monetise, at least not me — I am not paid for the journalistic services I provide there. Or, for that matter, here on this website. But the payback comes in other ways.

I wish everyone at The Stage all of the very best with future endeavours, but for me, today, I happily embark on the next step of my theatre journalism journey and I hope you’ll join me for the ride — here and elsewhere.