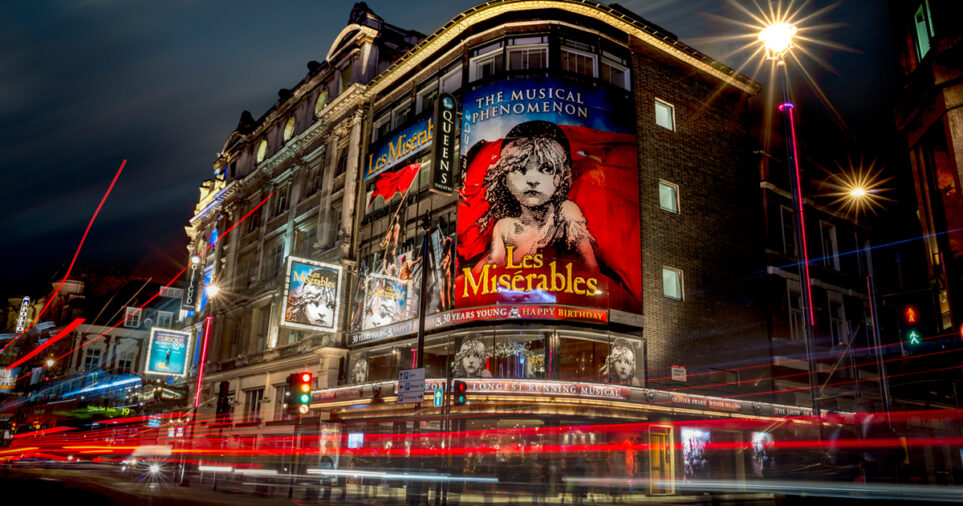 Every day a little death from the 1973 musical A Little Night Music is one of my favourite but most crushing Sondheim songs, articulating precisely those tiny moments of accumulating despair in a dying relationship. “Every move and every breath/ And you hardly feel a thing, /Brings a perfect little death.”

Somehow that song also feels perfectly apt to describe my growing despair of this period of suspended animation in our current (lack of) theatrical life.

But the existential crisis we’re all facing has been suddenly and dramatically crystallised with the calamitous announcement today that Cameron Mackintosh — the world’s richest theatrical impresario by far and owner of eight prime West End theatres — has begun the process of making all employees of its current London slate of shows redundant. The return of its productions of Les Misérables, Mary Poppins, Hamilton and The Phantom of the Opera has been delayed “until as early as practical in 2021”, and in a statement, Mackintosh has made clear the possible roadblocks to achieving this.

First, it will dependent on “further advice and guidance from the Government including, and subject to, any social distancing requirements being completely removed for theatres.” That’s a big ask: where we stand today, effective social distancing is the only mitigation possible against the virus’s continued spread. As the New York Times reported on June 9, In the absence of a vaccine or even effective treatments, the only proven strategy against the coronavirus to date has been limiting human contact.”

Mackintosh’s statement, however, also went on to say that even once social distancing requirements are lifted, “it is anticipated it will take several months of preparation for each of our productions to be remounted as well as time for audience confidence and advance sales to build.”

So that’s a whole lot more uncertainty, especially around the latter requirements. A huge chunk of West End sales is to visitors — both domestic and international — and who knows when they’ll return to build that confidence.

As the shutdown took hold on Broadway, one of the earliest casualties was Disney’s Frozen, its latest entry to the boards, which the company announced on May 14 would not be returning if and when Broadway came back. The New York Times reported, “Frozen had been the weakest of the three Disney musicals that had been running on Broadway — the others were The Lion King and Aladdin — and the company made it clear that it does not believe audiences will return in substantial enough numbers to sustain all of those shows.” Thomas Schumacher, the president of Disney Theatrical Productions, said in a letter to staff, “This difficult decision was made for several reasons but primarily because we believe that three Disney productions will be one too many titles to run successfully in Broadway’s new landscape”.

A similarly reconfigured West End, if and when theatres are in a position to return, could likewise see some of the current slate of shows vanishing. But if Mackintosh and Disney — with their vast personal and corporate reserves respectively — are already tightening their belts this much, where does that leave the rest of theatreland?

Outside of London, theatres like Birmingham Hippodrome, Newcastle’s Theatre Royal and Cardiff’s Wales Millennium Centre have also been in the process of making staff redundant, while Southampton’s NST has also gone into administration.

Addressing a House of Commons select committee on culture last week, Julian Bird – chief executive of UK Theatre and the Society of London Theatre – said, “There are just under 1,100 theatre buildings in the UK, around the same as Asda and Morrisons stores combined. Just over 50% are charities or trusts. They are in every town and village area, at the heart of communities. Our latest survey told us 70% of theatres or production companies will run out of cash, go out of business, by the end of this year.”

So although I hate to say it, but the prospects are very bleak. Confidence in the viability of the West End and Broadway is currently being shaken, but so is the network of regional theatres that support it. And that will not only impact on current shows, but also the prospects for future shows. Will investors return to finance them, when this (or another) virus can appear and shut it all down?

As a New York Times report yesterday summarised our current state of knowledge, “We know that countries where everyone wears a mask outside the home sharply reduce the spread and that people who practice strict social distancing infect fewer people and are infected less often. And we know that people who avoid ‘superspreading’ events — large, prolonged social gatherings, religious services and crammed nightclubs and workplaces, where one highly contagious person can quickly spew the virus to many others — are less likely to get infected.”

Theatres, unfortunately, especially as most are configured with seating tightly pushed against each other and inadequate ventilation, are super-spreading events, and even I — who love the theatre so much that I’m known to go up to 12 times a week — can no longer afford to risk my physical health doing so. Meanwhile, of course, my mental health is taking a big hit. I’m trying to recalibrate my life around what’s important to me now. And if the absence of theatre has left me grief-stricken, I am trying to remain hopeful that it will one day return. But it may be a few months, or even a few years, before that happens.