February 16: Human diversity should be celebrated in theatre — so why are plus-sized actors given fewer opportunities? | Shenton Stage 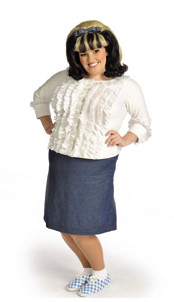 One of the glories of the human race is that we come in all shapes and sizes, colours and creeds, likes and dislikes. We are not a piece of technology with identical working parts. And this manifests itself in many different ways, from the food we like to our choices of partners (or the choice not to have them), to our tastes in entertainment and the work we choose to do.

It’s why I never presume as a theatre critic to be right or wrong in my assessment of a piece of entertainment; theatre, like everything else, is always a matter of taste (as a friend is always fond of remarking, “And that’s why Baskin Robbins has 31 flavours”).

And our tastes are, invariably, the product of as many external and unconscious factors as they are shaped by our past. We don’t even own them entirely ourselves. So I try to always be receptive to new experiences and expose my palette to new tastes, whether in food or art, cities and countries.

Yes, I’ve reached a certain age and have very clear ideas now of people, places and things I like — and only a finite time left in which to enjoy them, so I’d far rather go to New York, Provincetown or Barbados (places I’ve been to frequently and already know I love) than chancing a holiday somewhere else — assuming that is, we’ll ever be able to go on holiday again…..

But I’m amenable to being persuaded that somewhere like China, India or even somewhere closer to home like Prague or Budapest ought to be on my on holiday list one day. (And after watching and obsessing over Call My Agent, I’m dying to revisit Paris as soon as humanly possible).

Society is also constantly shape-shifting, too, sometimes for good, sometimes for ill. We only need to look at what happened in the US, after the country had eased itself to a position where it had elected a black president for two terms, but followed it by instead electing President with authoritarian ambitions who actively supports white supremacists, and may very well be one himself.

I hope it’s not too big a leap from that sort of shape-shifting to another, but I also chanced over the weekend on a tweet posted by West End actor @ChloeSJHart last Friday.

In it, she writes,

“I have been working in the West End on and off for the past 11 years and, as with many people, my weight has fluctuated a lot in that time. I have been a size 24 and a size 12. Usually, when I get feedback from auditions such as, ‘Well she wouldn’t fit in the lift would she?’ (yes that was actually said), I’m the type of person who tells myself that it’s their problem. However, when I lost nearly 6 stone for an audition and got told that I was ‘still too big to play the love interest’, followed by ‘its amazing how much weight she has lost but her stomach still isn’t flat enough to play this role’. It’s fair to say that it did some damage.

I’ve lost count of the times I’ve been told I have a leading lady voice and a pretty face, but it’s a ‘shame about my size’. I’ve been conditioned into believing that I belong playing either the comedy best friend who ends up being the butt of all the jokes, or covering the much older characters in the show — which presents a whole different problem.

There’s worse. When it comes to “love interest”, apparently being overweight is a disqualifier — at least for contestants on Love Island. As Chloe (pictured above, as Tracy Turnblad in Hairspray in the West End in 2009) writes, creative director Richard Cowles was asked about the lack of representation of all body types on the show, and he replied that although he wanted the show to be representative, he also “wanted to ensure that the contestants were ‘attracted to one another’, implying no one could possibly be attracted to a plus size contestant.”

As a plus-sized critic myself, I’m not limited in the shows I review; so why should an actor be limited in the roles they’re invited to play? As Chloe writes,

“Take Molly from Ghosts and Kathy for The Last Five Years. They are two women in love, going through something painful, which to my understanding, isn’t an experience exclusively reserved for smaller people. How then does it make sense that I, or any other plus-size actress, would not even get in the room to sing the material due to size?”

Alex Young, who played Young Sally in the National’s Follies in 2017, posted a reply in which she said:

And it cuts both ways. As Tracie Bennett — who was also in that NT revival of Follies, playing Carlotta — tweeted:

Critics, too, play a part in this debate, revealing their true colours in the way they draw attention to the weight of actors as they describe them, rather than the parts they are playing. As I wrote here just a couple of weeks ago, a minor critic for an online publication not once but twice drew attention to the weight of Nicola Coughlin in reviews of two separate productions in which weight was not, in fact, a defining characteristic of the part she was playing. As Coughlin herself commented, ““My weight has no relevance to either the performance I gave in [Jess and Joe Forever] or in The Prime of Miss Jean Brodie.”

So we can all do better — critics and casting directors alike. And this is another debate that certainly needs to happen, as we hope for a more inclusive and egalitarian theatre when it returns.