And now the dominoes are already starting to fall on 2021. This year’s Glastonbury Festival, postponed from last year and due to have run from June 23-27, has been cancelled; as Julian Knight, MP and chair the DCMS committee that is helming an inquiry into the survival of festivals commented to The Guardian:

“We have repeatedly called for ministers to act to protect our world-renowned festivals like this one with a government-backed insurance scheme. Our plea fell on deaf ears and now the chickens have come home to roost. The jewel in the crown will be absent but surely the government cannot ignore the message any longer – it must act now to save this vibrant and vital festivals sector.” 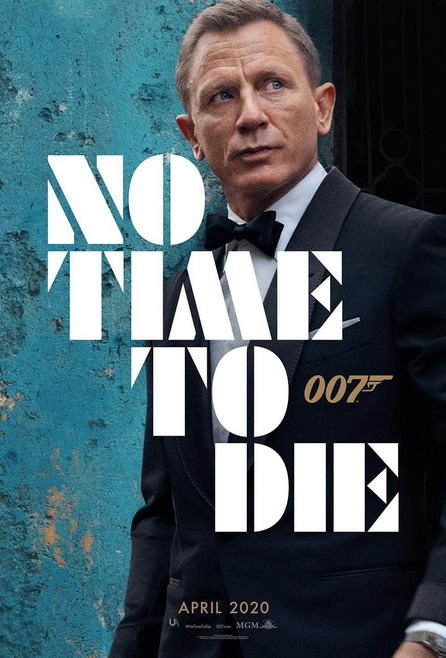 And the release of the new Bond film No Time To Die has been postponed yet again: from the originally planned last April (see poster above) to November, then to April this year, and it has now just been moved to October 8.

When the pandemic first arrived last year, Donald Trump told the world it would be gone by summer — speaking in February, he had this to say: “The virus that we’re talking about having to do, a lot of people think that goes away in April, with the heat, as the heat comes in, typically that will go away in April. We’re in great shape, though. We have 12 cases, 11 cases, and many of them are in good shape now.” His source? “I had a long talk with President Xi two nights ago, He feels very confident. He feels that again, as I mentioned, by April or during the month of April, the heat generally speaking kills this kind of virus. So that would be a good thing.”

400,000 deaths later and counting, Trump finally left the White House on Wednesday, his Covid-denialism and failure to take mitigating steps or provide an example to the country definitely contributing to that dismal state of affairs.

Meanwhile, in Britain, things are no better, as we hurtle inexorably towards our first 100,000 deaths with records for daily COVID deaths repeatedly broken this week. Back at the end of December, Boris Johnson was citing his chief medical officer Chris Whitty as saying he’d “set a sort of terminus of 5 April – Easter – when he thought things would be much, much, much better”; asked if this meant lockdown could be lifted then, he replied, “I’m not going to give you a deadline, but you’ve heard what I’ve said about April – that is the terminus ante quem,” finding himself spouting Latin as he often does when he wants to sound authoritative, but just sounding ridiculous instead (and just in case you’re wondering, that means ‘before that date’).

At Thursday night’s Downing Street press conference, home secretary Priti Patel wouldn’t commit to a date: “It’s far too early to even contemplate where we go with restrictions.” The Guardian’s news story was headlined: “Johnson raises fears of lockdown in England continuing into summertime.”

And after last night’s press conference, The Spectator’s Isabel Hardman in the magazine’s nightly Evening Blend e-mail column reported that Johnson, “who has really toned down his optimistic predictions recently, did try to sound upbeat about the progress of the vaccine. But… even the wider discussion about when this might be over wasn’t very cheering. Johnson warned of a long road ahead. Though he said the government would still review restrictions mid-February, few in government believe there will be a relaxation at this point. The date most in government seem to be shooting for when restrictions might start to lift in a noticeable way is May. But given the way the past year has gone, it’s hard to believe that this timetable won’t slip again and again.” 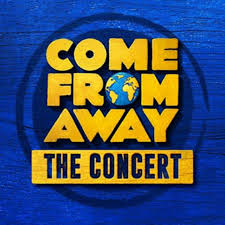 It’s understandable in this climate of chronic uncertainty, theatre producers are rapidly scaling back their plans for re-opening. Just this week the concert version of Les Miserables that had briefly opened at the Sondheim in December in-between lockdowns announced the cancellation of all performances to the end of February; while a concert version of another hit, Come from Away (above), that was due to run at the Phoenix from February 10-27 has been cancelled altogether.

Lambert Jackson Productions planned transfer of its production of Jason Robert Brown’s Songs for a New World, originally produced for just two performances at the London Palladium in November and which was due to run at the Vaudeville from February 5 to March 7, has suspended booking, according to the Nimax website, “whilst we work with the producers to reschedule performances.” And Disney have also postponed the planned April arrival of its stage version of Frozen at the newly refurbished Theatre Royal, Drury Lane, while other shows announced for May like the new production of Anything Goes that was due at the Barbican from May 8 has now announced that it will now begin there from June 5.

And also this week, the Open Air Theatre announced that last year’s planned production of a new musical version of 101 Dalmatians (above), already postponed to this year’s season, will not be produced at the theatre this summer, either. In a press statement, the theatre

“confirmed that, with great regret, they will be unable to go ahead with their plans to present 101 Dalmatians as part of their 2021 season. Indications appear to be such that restrictions will almost certainly still be in place when rehearsals were due to begin in March and that any easing of social distancing during our performance period is likely to be measured. In this context, it has become clear that, both practically and financially, it will be impossible for us to produce this ambitious brand new musical with complex puppetry and large ensemble cast…. we are exploring  all options with our co-producers, writers, and creative team and very much hope to be able to announce new plans for the production in due course.”

For now, the theatre is still saying that their planned productions of Romeo and Juliet (June 26-July 24) and Carousel (July 30-September 18) are going ahead.

“There’s been a paradigm shift since November. Although the vaccine provides a light at the end of the tunnel, new mutations of the virus have created uncertainty as to just how long the tunnel is…. My personal view is that performances with socially distanced audiences may not occur until May at the earliest, and that it will be some months before those restrictions are further eased.”

Swain also reports that the government’s Culture Recovery Fund — which was only meant to cover things till the end of March — saw theatre claiming only £123.5m in grants, “or less than 8% of the fund, even though the sector has lost over a billion pounds in revenue and incurred hundreds of millions more in actual losses.”

She likewise cautions that “even if performances can resume without social distancing by July, they won’t be back to ‘normal’, since there will likely still be limits on international travel and far less tourism than usual.”

Also unknown: whether there’ll be enough of an audience, already financially strapped by twin economic impact of the pandemic and Brexit, will actually have the money to hand to spend on expensive theatre tickets.

Hope, one of the most essential qualities of all to sustain in theatre, is seeping away. As Natasha Tripney wrote in The Stage this week,

“That first period of lockdown, though devastating for many, saw some people voice a note of cautious optimism. This enforced pause was an opportunity for the industry to rethink and reset, to come back better…. It’s hard to gauge the impact of a crisis when still in the middle of it. Almost a year on from the beginning of this pandemic, fatigue has taken its toll. The many losses that have marked the past 10 months, the endless cancellations and the low-level mourning of lost time make it difficult to summon that same flame of hope.”

She speaks mainly to subsidised theatre makers, who are at least still being paid to keep the flame of theatre alive. Tamara Harvey from Theatr Clwyd speaks of how the theatre has newly engaged with its local community:

“If we open our doors wide enough then people with needs we don’t even know about will feel able to walk through. The work now, and always, is to listen to our communities to understand new ways to serve them.” And she hopes to sustain these relationships into the future: citing a favourite book of her four-year-old daughter, Patrice Karst’s The Invisible String, which suggests that we’re connected to those we love by invisible string, she says, “When the world opens up, I think – and certainly hope – that those connections will still be possible, that the spider’s webs of invisible string we’ve created will still hold. And, indeed, that we’ll continue to weave new ones, hopefully building a more connected and more open community of theatremakers across the country.”

Theatremakers have been all in this together, of course, but some have been more affected than others, and some have been proactive than others. While independent (and unfunded) freelancers like Adam Lenson, the aforementioned independent producers Lambert Jackson and the similarly unfunded Old Vic have sustained a constant flow of digital initiatives that have employed countless actors and other freelancers, the Young Vic has done absolutely nothing at all, apart from a one-off birthday celebration which re-opened the theatre for one weekend, at which artistic director Kwame Kwei-Armah employed his son as the event DJ.

So as Tripney’s piece concludes,

“As the third lockdown continues, with the prospect of even stricter measures on the horizon, things can feel bleak. Exhilarating as it was to see live theatre return briefly in December, it’s hard not to feel that a lot of people poured financial and emotional resources into something that could never have succeeded as we headed into winter. Even with the vaccine roll-out in the UK, we are a very long way from being out of the woods. And that’s just those of us in a rich, western country. The prospect of a return to ‘normal’ for much of the world remains a long way off. But change is a process. It is not always linear. It takes work and it takes time.”

She opened the piece with a quote from Battersea Arts Centre artistic director Tarek Iskander from last April that anticipated and looked forward to systemic changes to the industry in the wake of this crisis: “Let’s not squander this once-in-a-generation opportunity. Let’s think long-term and think big.”

She ends it with another more recent quote from him: “Lockdown and rising cases have hit confidence and slowed visible change a lot. But I am hopeful that as we all regroup, bigger changes will be seen. Sadly this was always the work of months, if not years.”