March 15: The first anniversary of the West End shut down tomorrow | Shenton Stage 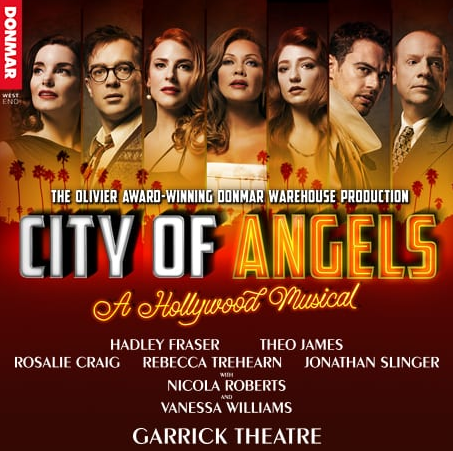 It was just after 5pm on March 16, 2020 that Boris Johnson made his heart (and business) stopping announcement:

“Now is the time for everyone to stop non-essential contact with others and to stop all unnecessary travel. We need people to start working from home where they possibly can. And you should avoid pubs, clubs, theatres and other such social venues.” 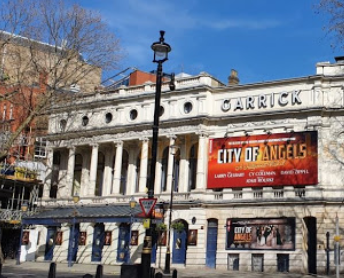 I had already arranged that evening to go into the West End to see City of Angels, then in previews at the Garrick, and due to open officially that Friday. But I had feared what was coming, and had asked Josie Rourke and Nica Burns, the director and West End producer of City of Angels, respectively, if they’d let me in early, in case we didn’t get to Friday.

They’d agreed; and despite Johnson’s announcement, it wasn’t exactly an order to shut down theatres, so my husband and I jumped on the tube to head into town. 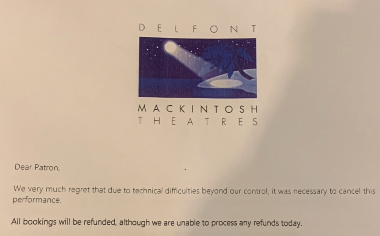 We emerged from Leicester Square tube shortly after 6.30pm, next to Wyndham’s Theatre; staff were standing outside that theatre, clutching pieces of paper, which looked ominous. I asked for one [pictured above]: it said that tonight’s performance of Stoppard’s Leopoldstadt was cancelled (but suggested “technical difficulties” were to blame).

So we walked on down to the Garrick to collect our tickets. I went to the box office: tonight’s performance was cancelled there, too. Earlier in the day, Southwark Playhouse’s press officer Susie Safavi had rung me inviting me back to see The Last 5 Years that evening, as I’d tried to revisit it the week before but one of its two co-stars Molly Lynch had been ill and that performance had been cancelled. Because of City of Angels, I declined the opportunity; but now I hastily phoned her, and asked if I could come after all. She said yes — and I jumped back on the tube to Elephant and Castle, from whence I’d actually come (and I live a few hundred yards from the theatre).

At Southwark Playhouse, things were slightly askew: the Studio show had also opted to cancel that night’s show. But The Last 5 Years went ahead. I remember going into the theatre, which was not full, and a colleague Matt Wolf — now acting editor for Broadwayworld — was in my sparsely filled row. He’d actually claimed a seat further along so he had no one sitting directly beside him. He said he wanted to stay safe.

That was the last show Matt or myself would see in an indoor theatre for the next five and a half months (there was an earlier return to live performance in the outdoors, with the return of Jesus Christ Superstar to the Open Air Theatre, Regent’s Park in July). 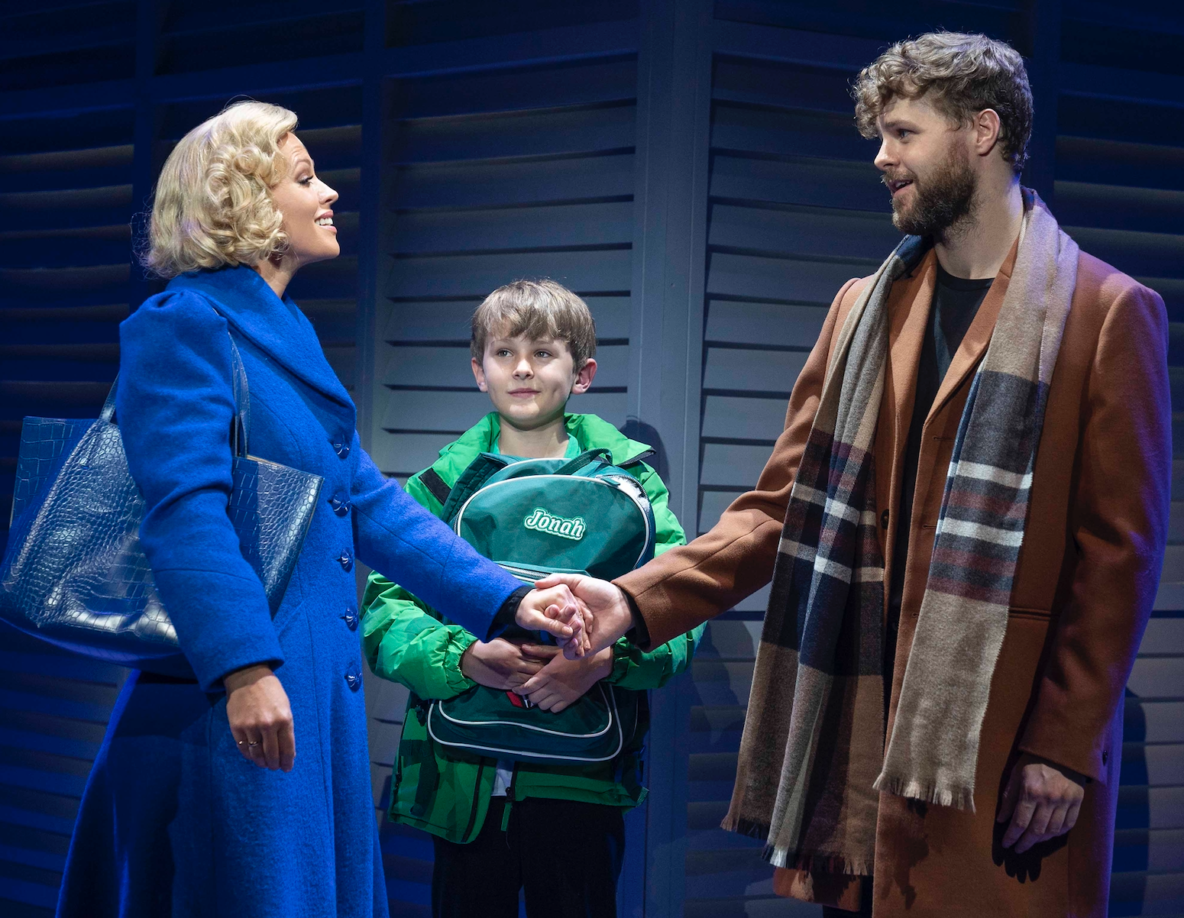 But on September 1, I attended the press night for Sleepless in Seattle [pictured above] at the Troubadour Theatre in Wembley Park; the first original full-scale new musical to open in London since Pretty Woman at the Piccadilly in early March.

But as I wrote in my review,

“While I really wanted to go in to bat for it and applaud the efforts of its lead producers Michael Rose and Damien Sanders to persist with what is being now billed as a “socially distanced run”, the show itself is distancing, and not just because we’re watching it from behind a transparent plastic shield that are laid on at the door for theatregoers to pick up (as an alternative to wearing their own mandatory cloth masks). It also feels like we’re watching it behind an invisible filter, in which its 90s sensibilities — “before laptops, smart phones and tiramisu”, quips the programme — feel like they’re from another age, too.

After over five months of enforced theatrical drought, a lot was riding on this premiere, and it does offer, at least, a template for what might be a new normal for the theatre for the foreseeable future, with audiences capped at just 400 seats (a third of the available seats), a one-way system operating throughout the theatre (and, in the gents toilets, only alternate urinals being available for use), and most significantly, perhaps, daily Covid testing for the cast and crew so that they do not have to perform to socially distanced limits but can actually interact with each other.”

That turned out be an early trial balloon for what the new normal might be in theatre for a while. By the time Southwark Playhouse — my last pre-lockdown theatre visit — reopened with a return of The Last 5 Years in October, we watched it not just masked, but individually separated by perspex screens [pictured below] between individuals or couples that had come together. 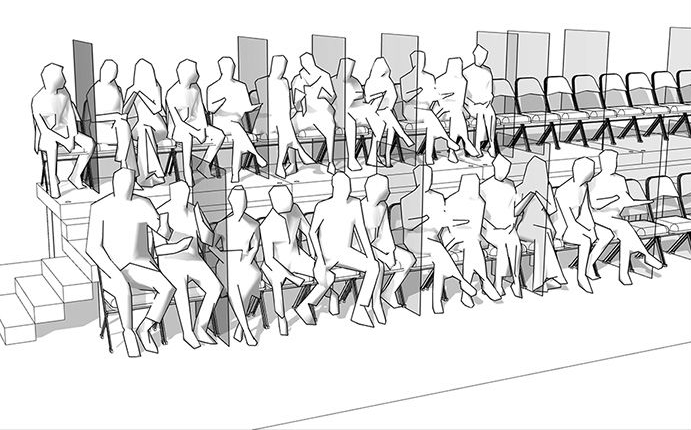 But even that return season didn’t manage to complete its run, either. By November, we were back in lockdown, and all live venues closed. But this time the Covid surge would, the government hoped, be contained, so that culture secretary Oliver Dowden’s plans for Operation Sleeping Beauty could go ahead. As he wrote in the Mail on Sunday on September 5,

“We need to start filling seats in much larger numbers – not just for the audiences, not just for the venues and livelihoods who depend on them, but for the entire urban economy, too. Theatre is a lynchpin of London’s West End and its absence is painfully reflected in its deserted streets.

Innovation is key. It has the ability to rewrite the entire script, and I’m keen to take some of the best experimental ideas for getting people into our theatres safely and put them into practice. It could be using technology to improve ventilation in venues, as used in the pilots at The London Palladium and other theatres.”

That’s just as true when people sit next to each other on planes. But as with flying, we can minimise the threat and help adults find ways to feel a sense of normality – whether it’s by getting on a plane, enjoying a half-price meal out (as 100 million did last month), or, indeed, by visiting the theatre…

There are people waiting in the wings to get full performances back on during the crucial Christmas period – and I want to support them./ My officials are working on ‘Operation Sleeping Beauty’ which aims to bring back some of the magic of theatre for families this Christmas, and I hope to share more progress soon.”

So once the COVID-surge had been flattened — even if its rise had been partly precipitated by that Eat Out to Help Out programme — theatres were given the go-ahead to re-open in December.

And many did, even if rule changes to how many people were actually allowed to occupy the seats changed, so that, for example, both the Palladium and Sondheim Theatres found they’d oversold the return of the Christmas panto and the return of Les Miserables (in a concert version) respectively, so some theatregoers had to be disappointed.

In the end, there were even more disappointed theatregoers, as a new mid-December lockdown for London loomed, as we were moved into Tier 3 restrictions: the Palladium panto never got to even hold its press night, cancelled after just six public preview performances, plus an invited dress rehearsal attended by Prince William and his family; I managed to attend the last possible press night for A Christmas Carol at the Dominion on Monday December 14, which also turned out to be its last night.

And then theatre was shut again after the next evening’s performances elsewhere (A Christmas Carol wasn’t due to play on that Tuesday evening).

My husband and I had planned a long weekend in the Lake District that coming weekend, and when the new lockdown was announced to kick in at midnight on Tuesday, we hastily left London earlier that morning to make sure we got to the Lakes (then still only in Tier 2 lockdown) before would not have been allowed to cross from Tier 3 to Tier 2 borders. (It still didn’t stop some lockdown snoopers from reporting me to the police after I’d posted about my trip there on social media, with officers paying us a visit at our hotel — which I’d named in one of my posts — to check when we’d arrived. The hotel were able to verify we checked in on Tuesday evening and there was no case against us).

As new strains of COVID19 emerged, the government enacted new Tier 4 restrictions for London, the South East and East of England, as Johnson announced on December 19 — though a partial exception was made for Christmas Day, allowing up to to three households to meet then, the government obviously having struck a deal with COVID not to infect people on that day and that day only.

And that particular brand of official stupidity has continued to mark Johnson and his goons response to the virus, which has otherwise mainly seemed to have presented a golden opportunity for Conservative friends and donors to get filthy rich by being awarded multi-million pound contracts by government ministers, without competition or scrutiny, to supply essential goods that they’d never been in business to supply before (like the guy who used to run the pub in the village where Health Minister Matt Hancock’s former constituency home was located, who suddenly became an expert in producing Covid test vials, pictured below with the minister). 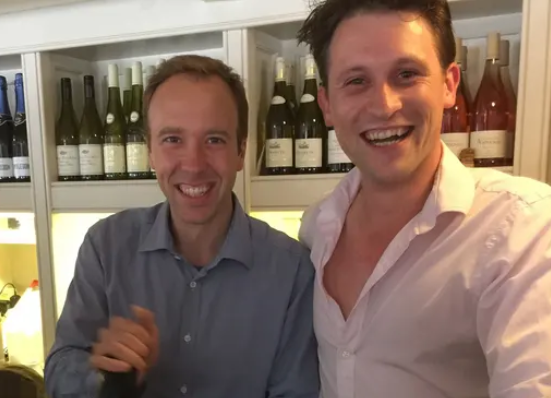 And that, until now, a full three months (and counting) later, has been that.

On February 22, of course, Johnson announced a so-called roadmap out of lockdown, with dates given when it might be possible to resume socially distanced indoor gatherings in mid-May, and another for the potential release of all restrictions in June; but as I previously wrote herehttp://shentonstage.com/february-23-planning-our-way-towards-normality/, at the time that announcement was made,

“Looking underneath the bonnet of what he’s got lined up reveals an engine that still has lots of parts missing. As Eleanor Lloyd, theatre producer and current president of SOLT, commented to the Evening Standard,

“The detailed document issued by government contains significant caveats for the target dates to be met and crucially those dates will only be confirmed one week in advance. Most West End shows need several months and significant financial investment to remount so I think it is likely that the re-opening of the West End will take place over the months following the green light being given.”

Theatre producers being an inherently optimistic lot — you wouldn’t be in the business if you weren’t, given that the odds of success are far outweighed by prospects of failure — producers have nonetheless used this roadmap to plot some kind of future.

And we’ve been lately inundated with announcements of new dates for new shows that had previously been delayed, dates for returning shows, and brand-new productions entirely.

Of course I can’t wait to be back in a theatre. And having had my first Pfizer vaccine — with a second one to follow on May 8 — it has started to feel, at least personally, that there’s a light at the end of this tunnel.

And yet just yesterday, The Observer ran this ominous story: 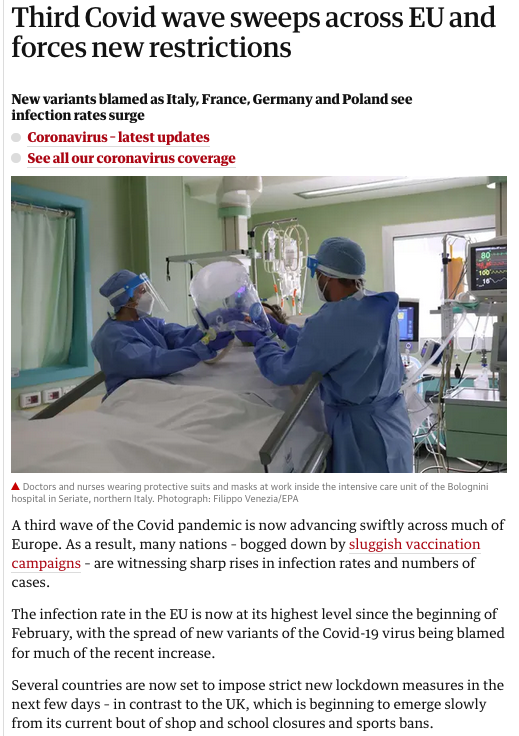 From today, most of Italy is being placed in lockdown again, it goes on, and reports,

“people will only be allowed to leave their homes for essential errands. Most shops will be closed, along with bars and restaurants./ In France, authorities have reported a similar grim situation, with health minister Olivier Véran describing the situation in the greater Paris region as tense and worrying. “Every 12 minutes night and day, a Parisian is admitted to an intensive care bed,” he revealed.

We may have left the EU — but if we’ve managed to self-sabotage ourselves economically by shutting down trade borders with our largest trading partners and neighbours, the virus isn’t going to listen to the same restrictions on returning to our shores.

So I just hope that we’ve not been over-optimistic in claiming victory in this long battle.