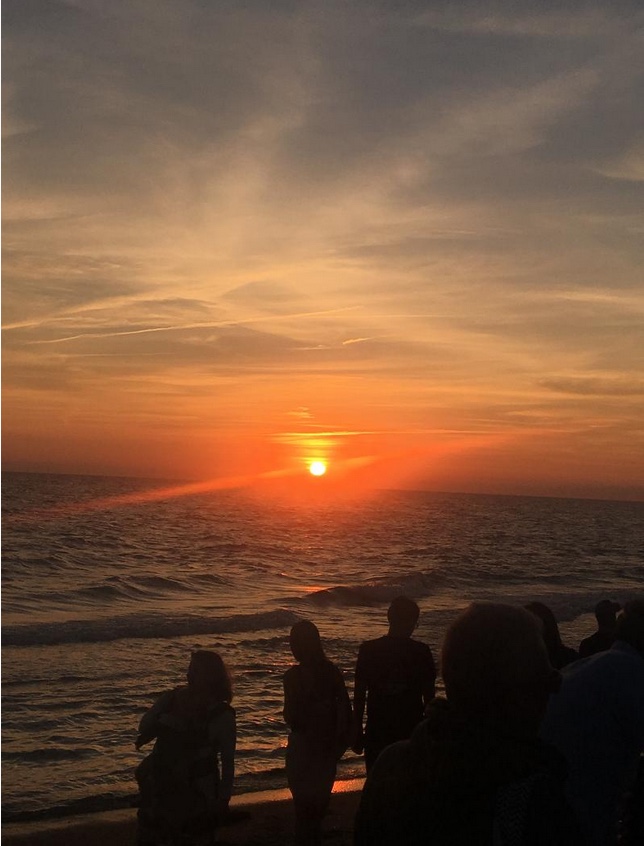 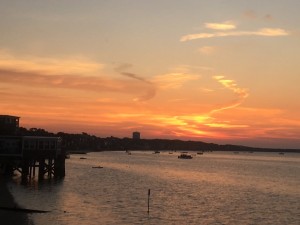 There is no greater busman’s holiday for a theatre critic than a trip to Edinburgh in August: in fact it’s no holiday at all, but an even more intense version of what we do year around.   So I’ve left it to my trusty critical colleagues to keep me abreast of my ignorance, and these days I experience Edinburgh entirely vicariously, through them — and eagerly await some of their discoveries to make their way on to a further life in London and elsewhere.

Instead, I have spent most of the summer in Provincetown at the farthest tip of Cape Cod (pictured at sunrise above, and sunset on top). It is a place of extraordinary natural beauty with its miles and miles of golden sand beaches and dunes, and has a unique historical significance as the first place that the Pilgrim Fathers made landfall in the US after setting off from Plymouth in 1620, before making their first settlement in Plymouth Rock across the bay.

As Cole Porter rightly predicted in the title song to his musical Anything Goes, “Times have changed /And we’ve often rewound the clock /Since the Puritans got a shock /When they landed on Plymouth Rock. /If today / Any shock they should try to stem /’Stead of landing on Plymouth Rock, /Plymouth Rock would land on them.”

P-town, as it is universally known, is a place where truly anything goes. It is a town of both inclusivity and exclusivity: it welcomes all — as long as you are happy to embrace its spirit of openness and generosity to all fellow human beings, with no regard to gender, sexuality, race, age or physicality.

And that’s also, stunningly, the message of the entertainers and entertainment who make this like both like an alternative universe and one where I feel totally at home.

I’ve seen plenty of shows — these are the dozen best things I’ve seen here (and a little beyond) since I arrived in mid-July.

Moulin Rouge. No, this wasn’t in P-town — but I took the ferry across the bay into Boston not once, not twice but three times to see the try-out of this Broadway bound show. Once was for a review for The Stage — twice was for pure pleasure. Broadway is going to have to wait its turn for this — the same lead producers Global Creatures are also bringing King Kong to Broadway next month, and will not want to compete against themselves for next year’s Tony’s, so this isn’t going to come in till next summer. But it will be worth the wait. This is the jukebox musical of your dreams: a fantastical explosion of great songs in thrilling choreography and gorgeous imagery. (And seeing it in Boston meant an extra pleasure: seeing the venerable Colonial Theatre, refurbished by new operators ATG, become an integral part of the design. You truly didn’t know where the production design ended and the theatre itself began: it was the most immersive theatre production I’ve seen since Natasha, Pierre and the Great Comet of 1812 utterly transformed Broadway’s Imperial Theatre. 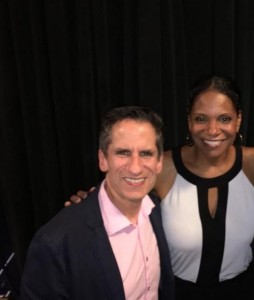 Audra McDonald. Also not in P-town, but further down the Cape towards Boston in Cotuit, it was a thrilling privilege to hear the great Audra McDonald in the extraordinary intimacy of the 180 seater Cotuit Center for the Arts. Winner of the most Tony Awards of any single performer in Broadway history — she’s got six already,  and she’s not yet 50 — she is the greatest Broadway soprano to be born in my lifetime. I have seen pretty much every Broadway show she has originated (I only missed Twelfth Night at Lincoln Center), and I’ve crossed the Atlantic more than once specially to see her. Travelling two hours south of P-town was no big deal. But she was, as ever, an informal and ravishing joy — and this was no mere concert, but also a live interview, conducted by pianist and Broadway expert Seth Rudetsky (pictured above with Audra), who really knows how to get the best out of his guests.

3) Seth Rudetsky’s Broadway at the Art House series. One of the most constant delights of the P-town summer is the Broadway series run (for the last eight years) by Rudetsky and his producer Mark Cortale, in which an array of extraordinary Broadway actors are lured to the tiny Art House (seating just 120 people) to sing and talk about their work with him. This summer’s acts included Liz Callaway (one of my absolutely favourite Broadway voices), Stephanie J Block (who actually lives on the Cape but whose next Broadway gig will be playing one version of Cher in The Cher Show, opening in December), Judy Kuhn and Adam Pascal, with Jeremy Jordan also presented in the larger Town Hall. I saw them all — a true joy. (Rudetsky will reprise the format with Ramin Karimloo at Leicester Square Theatre on October 5 and 6). 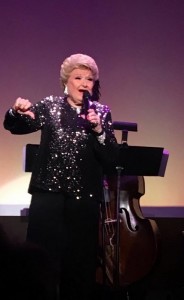 Marilyn Maye. This cabaret legend — now 90 years old — has appeared in P-town every summer for the past eight years, and long may she continue to do so. Once a regular on the Johnny Carson show, she made her cabaret come-back in 2006 when she was 78 — and like the best wine, has simply grown richer with age. The flavours she brings to her repertoire are rich, smooth and surprising. And unlike the brilliant Barbara Cook and Elaine Stritch, both of whom we lost in their late 80s but whose final live appearances were beset by memory problems, she’s on top of it all.

5) Randy Rainbow. This YouTube sensation with his wonderfully astute video pastiches of Trump’s regime that puts new lyrics to theatre songs has become one of the viral (and vital) pleasures of living through this era. Seeing him live at the Crown and Anchor was a joy as well as participating in a shared act of resistance. 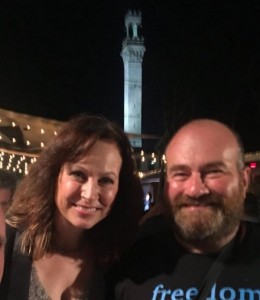 Linda Eder. Also at the Crown and Anchor, a concert appearance by the former wife and muse of composer Frank Wildhorn — for which she starred on Broadway in his musical Jekyll and Hyde — was a gorgeous evening of belting vocals. She seemed when she burst first onto the recording scene as a natural successor to Streisand; if she’s never realised that full star potential, she’s easily in the league of Streisand and Celine Dion. What a voice.

7) The Whining. Drag queen Varla Jean Merman is now in her 20th annual P-town season, and as well as a solo show she joined forces with Peaches Christ for a hilarious drag pastiche of the film The Shining at the Art House. This was a quintessential P-town show, relocating the action to the town and populating it with fellow local legends like the Town Crier, and featuring impressions of other local drag legends like Scarbie, Dina Martina and Miss Richfield. This felt like the ultimate ‘townie’ show — and to prove it, I even had one of P-town’s most famous townie’s, filmmaker John Waters, sitting right behind me.

8) Bingo with Scarbie. Not exactly a show, but a weekly Wednesday night institution is drag bingo with Scarbie calling the numbers (and calling out the audience with her own withering put-downs). I played it almost every week I was in town — and even won a couple of times —  but mostly this was about a real community get-together, bringing locals and visitors, straight and gay, together for sheer fun.

9) Love! Valour! Compassion! Terrence McNally’s heartfelt Tony winning play about a group of affluent gay friends meeting annually at the lakeside house of their choreographer host is, nearly a quarter of a century on from its Broadway premiere, still a haunting elegy of love, loss and friendship, under the shadow of HIV/AIDS. David Drake, Provincetown Theater’s new artistic director, staged a richly Chekhovian production and starred himself as the choreographer. 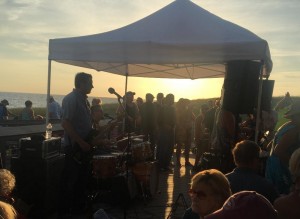 Music at Herring Cove Beach, Speakeasy with Zoe Lewis and Showgirls. There’s nothing quite like the twice-weekly series of free outdoor music concerts held on the beach at Herring Cove: I went to three of them, and it was wonderful to enjoy great live jazz music agains the backdrop of the sea and setting sun, played by bands that included Zoe Lewis and the Souvenirs. Also unmissable: the two 1920s Speakeasy nights that the British-born Lewis held at Pilgrim House, like a giant variety show of local talents that included the town’s harbour master, the former minister of the UU Church, and Town Crier Kenneth Lonergan. Another weekly variety show is Showgirls, a parade of (mostly) drag stand-up, usually held at the A-house (the longest established gay bar and club in town), but the week I went was held at the local High School: nothing speaks of P-town’s sense of itself than that its auditorium was home for such a parade of eccentric and outrageous talent.

11) Raging Skillet. In Wellfleet, there’s a little year-round purpose-built theatre the Wellfleet Harbor Actors Theatre, where I saw Raging Skillet, an affectionate and affecting stage version of Chef Rossi’s autobiographical account of her relationship with her mother and much else. Even if there are times when the gear shifts from autobiography to stage play are a bit clunky, it tells such a good human story that its an uplifting joy to watch. 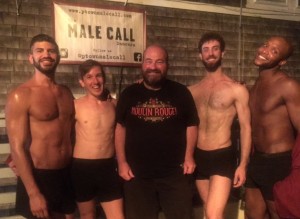 Male Call. Being a town with a big gay population — both local and visiting — as well as occasional bachelorette parties, it is inevitable that sex sells. And Male Call — a strip show that recalls the hedonistic days of the late, great Gaiety strip club that I used to regularly frequent on the corner of w46th and Broadway in Nw York — is done with enough artistry to remove any hint of sleaze. Robert LaFosse, a former principal dancer with New York City Ballet and a Broadway Tony nominee for the original 1989 production of Jerome Robbins’ Broadway — is credited as choreographer!