In the increasingly adversarial world of Twitter, people are constantly spoiling for a fight or simply dismissing each other entirely. The Young Vic’s associate director Nadia Latif epitomised this recently in a reply to a controversy that Matt Trueman had unwittingly ignited with a reply  that dubbed him simply, “trash trash trash.” Her provocation continued, “Mind you, I always feel like it’s just a matter of time before white male critics rip off their mask of respectability and reveal the racist/sexist/elitist/myopic lizard men underneath. Bun them all.”

It hasn’t always been thus. There was a time when Twitter was more civil, civilised and civilising. In a word, there used to be more respect. But that, of course, was before Donald Trump — and our powerlessness in the face of the world’s most powerful man using Twitter as a bully-pulpit to name, childishly nickname and try to shame his adversaries has meant that others have — wittingly or unwittingly — been following suit.

But I’m reminded more than ever of a time, not so very long ago, where instead of using Twitter to attack each other, we used to use it to ENGAGE with each other and find common ground, even friendship.

And here’s an illuminating example. In 2010, about a year after I joined Twitter, I was tweeting about the latest jukebox musical to open in London, and was somewhat hostile about it. (I think it was Flashdance at the Shaftesbury, though I’m not absolutely certain). I got some kickback from one of my early followers, @blackoutpete, who I’d had some more positive interactions with, so I asked him aloud: why was he so upset? And he explained that, as someone who had created a jukebox musical himself that had been mauled by most of the critics in London, he felt understandably defensive.

It turned out that he was Peter Michael Marino, the writer of the stage musical version of Desperately Seeking Susan, set to songs by Debbie Harry and Blondie, which had opened in 2007 at the Novello Theatre — and closed soon after (original stars Emma Williams and Kelly Price are pictured below). I had actually seen it twice — reviewing it when it first opened, and then returning to see it again on its final matinee.

I wasn’t (at least not intentionally) being a cruel ambulance-chaser, but genuinely interested in trying to understand what had gone so disastrously wrong in taking a popular film and great songs and transposing them to the stage together.

I told him I had really tried to like it, not simply dismiss it. And the next time I was in New York, we met up. It turned out that we had more in common with each other than we thought — including a shared history of suffering from depression. We became friends — and we are still regular buddies today, meeting up for dinners and seeing shows together when I’m in New York.

So, to quote the song from Oklahoma!, “the farmer and the cowman should be friends. /One man likes to push a plough, the other likes to chase a cow, / But that’s no reason why they cain’t be friends.” 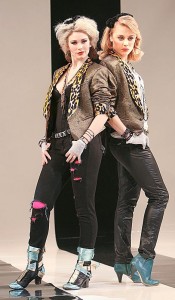 And as Peter told me a few weeks ago when we met up with each other in New York again, “Isn’t that so relevant to today’s political climate?” Instead of everyone being so adversarial, perhaps we can actually find some common ground with each other as human beings. “Part of our original conversation was that I didn’t  understand why someone who was so passionate about theatre would take any kind of pleasure in artists being unemployed. I’ve done it myself — when Spiderman  — Turn off the Dark was on Broadway, I created a video that had every bad review set to the opening credits of the Spiderman cartoon, and it made it into the New York Times. But since then, I’ve become a champion of not bashing stuff — be quiet, or just tell your friend in the bar. So it doesn’t stop you and I now commiserating about seeing shitty shows together!”

But I’m a critic and it’s partly my job to speak my thoughts aloud. Nevertheless, I am actively more mindful nowadays of how they may be received now, and will no longer tag people in a tweet if I’m being negative about their show.

Peter, however, has also found a much more fruitful channel for his dreadful experiences on Desperately Seeking Susan, which led to a prolonged bout of depression in which he could not leave the house for months after he got back from New York: he created a one-man show about it, called Desperately Seeking the Exit. It took its title from the parting line of Charles Spencer’s review of the show for the Daily Telegraph: “I fear that Desperately Seeking Susan will leave most discerning theatregoers desperately seeking the nearest exit.” 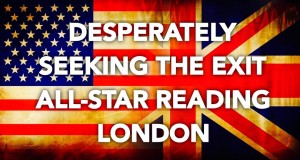 It premiered at the 2012 Edinburgh Fringe — and has since been seen at London’s Arts Theatre. Many of the original cast members and producers have seen it. Tonight it will be revived at the Arts for one night only, but not as a one-man show but as a reading by a cast that includes original workshop cast member Neil McDermott and guests that include Steven Serlin, David Calvitto, Tim McArthur and Amy Cooke-Hodgson. I wish I was in London to see it again.