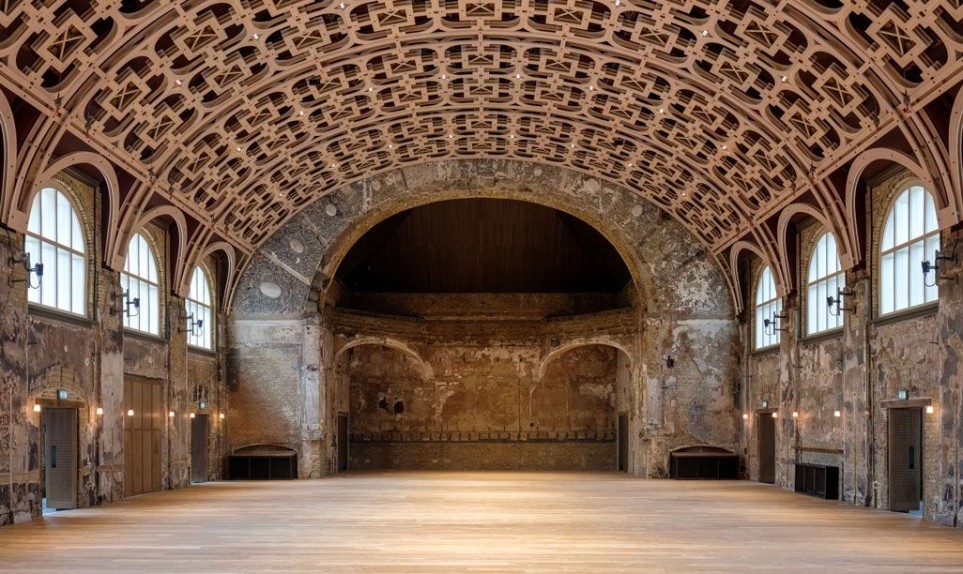 The shifting tectonic plates of the artistic leadership of some of the leading theatres in London and the regions moved again this week — first with the appointment of Madani Younis to a new role of creative director at the Southbank Centre (and leaving his current job at the Bush), then with the appointment of Rachel O’Riordan to take over from Sean Holmes at Lyric Hammersmith (thus also leaving a vacancy at Cardiff’s Sherman Theatre that has run since 2014). I wrote about the current  merry-go-round of artistic directors for The Stage here, and said: “There’s an unrivalled opportunity for a new theatrical order and identity to be forged. Let’s hope that diversity – of all types – continues to shake up these theatres.”

LONDON OPENING OF THE WEEK
Two American plays both received their UK premieres this week.

* Dance Nation, Clare Barron’s play about competitive dancing was “already heaped with praise Stateside” according to Dominic Cavendish in the Daily Telegraph, and opened in a new production at the Almeida on September 4 directed by Bijan Sheibani. But Cavendish went on in his two-star review to call it a “competent but underwhelming account of six adolescent girls (and one boy)  pushing themselves to the limit, coming to terms with who they are and, what they want, doubting, hoping, exploring, their bodies almost their own, yet not.” In The Guardian, Michael Billington was more favourable, saying in his four-star review: “Clare Barron’s prize-winning American play is the theatrical equivalent of a whispering gallery. Its story of 13-year-olds taking part in a dance competition evokes every high-school musical you’ve ever seen. The bullying dance director and the confessional monologues remind you of A Chorus Line. The idea of adult actors playing kids goes back as far as Dennis Potter’s Blue Remembered Hills. Yet for all its echoes, it comes across as a wildly idiosyncratic show that packs a lot into its 105 minutes.” 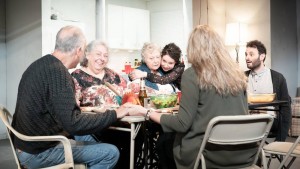 * The Humans, Stephen Karam’s play that transferred to Broadway in 2016 after premiering off-Broadway the year before and won the Tony for Best Play, opened at Hampstead Theatre on September 6 with its original New York cast intact (pictured right). Describing the play as “bitterly funny and piercingly sad”, Paul Taylor wrote in a four-star review for The Independent, he also explained how Hampstead’s artistic director Ed Hall had seen it in New York, “and immediately wanted to produce it – he assumed this would be with a British director and cast – at Hampstead. But he also admitted to himself that Joe Mantello’s original Broadway production could not be bettered. We owe Hall a debt of gratitude for his modesty and daring. He seized the opportunity of the American cast reuniting for a season in Los Angeles to bring the show over, giving us the chance to marvel at its rhythmic precision and remarkably lived-in and authentic performances.”

REGIONAL OPENING OF THE WEEK 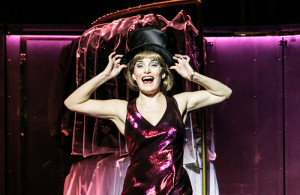 Sweet Charity, the great Cy Colman, Dorothy Fields and Neil Simon musical that was already revived at Newbury’s Watermill Theatre earlier this summer, received a second new production at Nottingham Playhouse, directed by Bill Buckhurst, starring Rebecca Trehearn in the title role (pictured right). In a four-star review for The Guardian, Michael Billington writes, “This production is worth seeing for Rebecca Trehearn’s performance alone, as well as Alistair David’s choreography, which breaks free from the Bob Fosse template.” He goes on, “Everything hinges on our response to Charity herself: a role created by Gwen Verdon and made famous on film by Shirley MacLaine. If played too sentimentally, the show doesn’t work. Trehearn is spot-on in demonstrating that Charity, however unlucky in love, is the eternal cockeyed optimist. Above all, Trehearn is funny…. And – the test of Trehearn’s performance– she succeeds in making you feel that the real losers are the men who reject her.”

* Peter Andre and Russell Kane are joining the cast of Thriller Live at the Lyric — but for one night only this coming week. On September 12, they will appear in a gala performance in aid of the Prince’s Trust, being held to mark the show’s 4,000th West End performance.

* Actress-turned-playwright Natasha Gordon will join the cast for the transfer of her own debut play Nine Nights from the National’s Dorfman to Trafalgar Studios from December 1. She will play Lorraine (originally Franc Ashman at the National), alongside Cecilia Noble, Rebekah Murrell, Oliver Alvin-Wilson, Michelle Greenidge and Hattie Ladbury returning to their original roles. 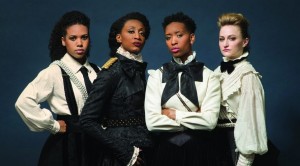 * Sylvia, now previewing at the Old Vic, was supposed to have opened to the press this coming week on September 11, but it was moved to September 17, with a press statement saying: “The show has evolved during its rehearsal period and the creative team and The Old Vic have taken the decision to extend previews to allow more time to work on and nurture this ambitious new piece of work.” Its first scheduled preview on September 3 was also turned into an invited dress rehearsal — but the performance was halted after cast member Genesis Lynea fell ill onstage during the second act.  The next two previews were also cancelled.

* Hooray! West End producers Cameron Mackintosh, Sonia Friedman and Nica Burns are amongst those who have committed to supporting the aims of the #YesOrNo campaign: letting actors know the outcome of auditions, as The Stage reports. 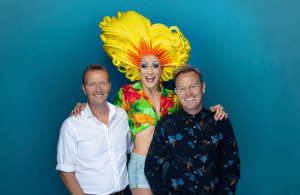 Jason Donovan is set to have his name above the title again, not as a performer but as a debuting producer: he is set to join Mark Goucher (pictured right with Donovan and a cast member), Gavin Kalina and Matthew Gale as co-producers for a new national tour of Priscilla, Queen of the Desert, beginning performances in Dartford in September 2019. Donovan played Tick in the show’s original West End run in 2009. In a press statement, he has said: “Priscilla is perfect vehicle to venture into the world of producing and bringing all my experience on the show seems the logical next step. Priscilla is such a wonderful Australian story about diversity. It is a modern musical with a great heart.” 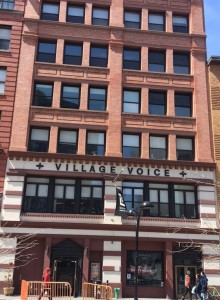 The Village Voice — the weekly New York newspaper that was once at the cutting edge of the downtown arts scene — has closed down. It had already become digital only a year ago; now its website has shut, too. The publication’s annual Obie Awards, honouring off and Off-Off Broadway, will continue under the auspices of the American Theatre Wing, who have partnered in their presentation for the last four years.

When I spoke to executive director Heather Hitchens earlier this year for The Stage, she told me: “We’ve added a lot of programmes, because we’re concerned about the whole pipeline. We’re very proud of our Broadway footprint, but it has always been important to us to pay attention to Off-Broadway too – we’re very interested in the developmental side of work. We’d been struggling for a long time to find the best way of embracing Off-Broadway, and when the opportunity came to fold the Obies into what we do, it became a way to complete a broken link in the pipeline. It’s a seamless, perfect marriage. The awards have a lot of prestige, but we don’t have to reinvent the wheel. We can give them some organisational help and elevate it, improving its visibility and giving it a safe home.” 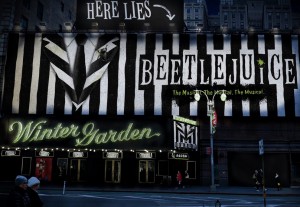 Beetlejuice, a musical version of Tim Burton’s 1988 film of the same name with songs by Eddie Perfect (who will also be represented on Broadway this season with King Kong) and a book by former New York magazine theatre critic Scott Brown and Anthony King, has announced its Broadway home: its will begin performances next March prior to an April opening at the Winter Garden, currently home to School of Rock. Alex Brightman, who originated the role of Dewey in School of Rock, stars as the ghost Betelgeuse; he will therefore be literally haunting his old theatre.
It will first play an out-of-town try-out at Washington DC’s National Theatre from October 14, prior to an official opening on November 4.

* Be More Chill, currently running at Off-Broadway’s Signature Theatre, is moving to Broadway’s Lyceum next March — despite negative reviews in the New York Times for both its original regional outing at New Jersey’s Two River Theatre in 2015, and now. However, social media has rendered those reviews redundant: as Kurt Deutsch, the founder of Ghostlight Records who released its original last album in 2015 told the New York Times, “We started to see these fanimatic, homegrown videos of ‘Michael in the Bathroom,’ and these Tumblr and Reddit pages were getting a lot of traction, and the streaming numbers were going up substantially. It was completely organic — we don’t have tons of marketing dollars to make this happen. It just grew to become a viral sensation.” That album has now been streamed more than 170 million times worldwide.

CONTROVERSY OF THE WEEK 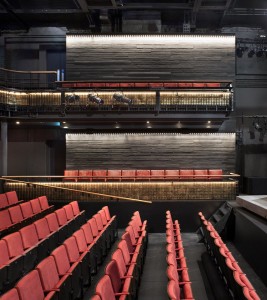 As the Kiln Theatre (formerly the Tricycle) in Kilburn launches its first production in its completely refurbished home, a fresh controversy erupted over its renaming, with former artistic directors Ken Chubb and Nicolas Kent and former chairs and board members writing a letter to The Guardian, stating: “The Tricycle was a landmark in London, and a brand locally, nationally and internationally. In our view this change of name throws away a valuable legacy and history. We wish the reopened theatre well, but – if it is to prosper in the community, the profession and among audiences for whom it has strived to please for the last 38 years – this is the time to rethink and retain its much-loved name.”

More industry figures, including leading directors Erica Whyman, Dominic Cooke, writers  David Eldridge, Simon Stephens, Richard Bean, Rebecca Lenkiewicz, Duncan Macmillan, April de Angelis, Samuel Adams, Roy Williams and Tanika Gupta, and designer Tom Piper, have also written a joint letter in support of the name change to The Stage: “We fully acknowledge the rich and special history of the Tricycle, and we have all had unforgettable evenings there. But we stand with Kiln and its proposition that theatre is not here to fossilise culture but to invigorate it. While honouring the past, it must also reach out to new audiences and artists, who will come to Kiln with fresh perspectives, ideas, energy. Theatre’s mutability is its strength.”

WEIRD POSTER BILLING OF THE WEEK 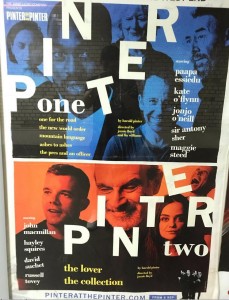 On the tube posters (right) for the Pinter at the Pinter season, Antony Sher’s name is prefixed with his title, Sir. Director Jamie Lloyd replied (https://twitter.com/LloydJamie/status/1037829416645263360) to my tweet asking why this was by stating: “It was a mistake! Nothing to do with Tony, who would never insist on that. It has been corrected everywhere else.

FEATURE OF THE WEEK

In The Guardian, Matt Trueman highlighted the work of some of Europe’s hottest theatre directors, Germany and France to Austria and Croatia. I’m embarrassed to say I’ve not heard of any of them – but I look forward to being introduced to their work.

RE-OPENING OF THE WEEK 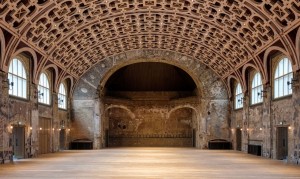 BAC’s Grand Hall reopened on September 6, three years after a fire totally destroyed it. It looks glorious! Whatsonstage have a video tour of it: https://www.whatsonstage.com/london-theatre/news/battersea-arts-centre-grand-hall-reopened-video_47529.html Artistic director David Jubb says, “The re-opening of the Grand Hall marks a massive moment for us – it’s the first time the entire building has been fully open for the public to explore for 12 years. This follows an iterative project which has renovated and opened up the whole building. When the flames rose above the Grand Hall on Friday 13 March 2015 it looked as if all that progress might be lost. But due to brilliant and brave firefighters – and the incredible generosity of more than 6,000 people and organisations – the building was saved and the Grand Hall is reborn!”