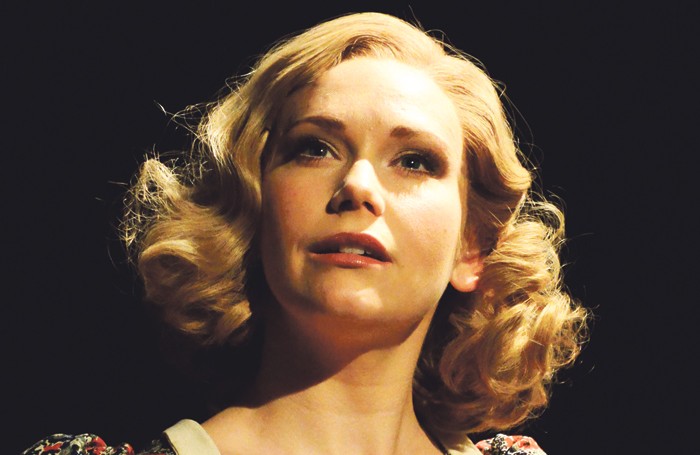 I’ve not updated my diary of a theatre addict for six weeks now — I was last here on January 31 — since when I’ve seen all of 49 shows, thumb including outings to Newbury, viagra dosage Dartford, Clwyd, Manchester, Bromley and Cardiff, plus a week in New York. I’ve also taken an active part in two more shows by appearing onstage as a contestant in a theatrical re-run of Mr and Mrs with husband (so it was really Mr and Mr, we’re pictured below with host Sam Holmes) and as part of David Bedella and Friends, his monthly chat show at the St James Studio. 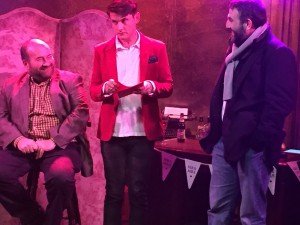 Mr and Mrs was a fundraiser for the Union Theatre, as it prepares to move to new premises across the street (an architectural representation of the new premises are shown left). As I wrote here, it’s one of my absolutely favourite of all London venues, just a stone’s throw from where I live and at whose outdoor, all-weather cafe I buy my daily coffee en route to the office I rent just around the corner. So I’m very much part of the Union’s extended family, and proud to be so; as I was also honoured to be included in Bedella’s bill, whose other guests included Janie Dee and the legend that is Mary Wilson, one of the original line-up of The Supremes.

Of those 49 theatre visits, several were naturally repeats — Bend it Like Beckham (twice more, including the last night, to take my total to seven), Close to You (for the sixth time, after seeing it during its original New York run, then three times at the Menier, and once before at the Criterion),  Funny Girl (another Menier show, seeing it again in the last week of its run there before its West End transfer next month, and catching Sheridan Smith’s understudy, as I wrote here), Grey Gardens (at Southwark Playhouse), and ENO’s The Magic Flute, though the latter was part of my commitment to The Mousetrap Foundation’s Play the Critic scheme, in which I took the student who filed the best review as a result of participating in the programme to a second opera after they went as a group to La Boheme, also at ENO.

But I also reviewed the following, and have actually seen most of these plays and musicals before (in different productions): 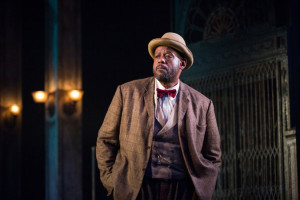 And during my week in New York, I also formally reviewed the opening of Hughie, a new production by Michael Grandage of O’Neill’s short drama (for The Stage here) starring Forest Whitaker (left), and I saw Mark Rylance in a play he co-created called Big Fish (reviewed by me here at Brooklyn’s St Ann’s Warehouse here, three days before he scooped this year’s Oscar for Best Supporting Actor).

In addition, I saw (but didn’t review) a new production of Disney’s Beauty and the Beast at ArtsEd, The Rolling Stone (Orange Tree), Cat on a Hot Tin Roof (Theatr Clwyd), Husbands and Sons (Royal Exchange), The Encounter (Barbican), Road Show (Union Theatre), Akhaten (London Coliseum) and Beyond the Fence (Arts Theatre); at least three of those were related to interviews I did around them — see below.

Across the last six weeks, I’ve also participated in forums about critics for students at the University of Chichester and LIPA, and hosted a spot-show talk at Funny Girl and a panel discussion on new musicals as part of the BEAM Festival at the Park Theatre.

I plan to get back into a more regular rhythm with my diaries in the coming weeks — but hope I’ve brought myself up to date now!
MAIN THEATRE OPENINGS OF THE WEEK??

This week I’ll be at the following:

MY TOP TEN SHOWS OF THIS WEEK 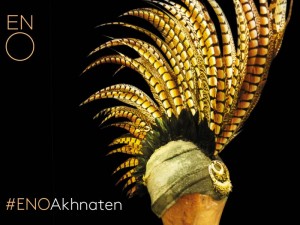 1) Akhnaten. Philip Glass’s 1984 opera is, now that Bend it Like Beckham has left town, my favourite musical evening in town — a glorious wallow in rapturously beautiful music, with an amazing, meditative staging by Phelim McDermott that is full of haunting imagery — and even juggling. It was seeing  the ENO’s original version in 1985 that made me a fully-fledged fan of Glass; now it’s wonderful to see it again in a brand-new production, running in rep at the London Coliseum, to March 18. I have just shelled out over £100 to buy a ticket to see it again this Thursday. Yes, it’s that good! Website: https://www.eno.org/whats-on/akhnaten/ 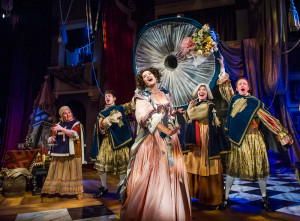 2) Nell Gwynn. A ravishing, rambunctious and hilarious new play by Jessica Swale that’s about a love affair both in and of the theatre, revolving around the true story of the 17th century actress who ended up as mistress to KIng Charles II. First seen at Shakespeare’s Globe for a run of just 11 performances last summer, it now gets a West End transfer the Apollo, starring the wonderful Gemma Arterton in the title role of Chris Luscombe’s production.  Shakespeare’s Globe previously also transferred Twelfth Night and Richard III with Mark Rylance to the same theatre. See my review for The Stage here. Website: http://nellgwynn.co.uk/

3) Motown. Not everyone loved this one — critical opinion was, to say the least, mixed. But even though I thought it was a bit of a cruise ship revue when I first saw it on Broadway, seeing it again in London, with a really fine mostly British cast pumping out the hits, warmed me to this show’s infectious and multiple pleasures. There simply hasn’t been a songstack quite like it in a jukebox musical ever — sure, it’s a pity some of the songs get cut off in their prime and the book makes Rock of Ages seem deep, but I still loved it! See my review for The Stage here. Website: http://motownthemusical.co.uk/ 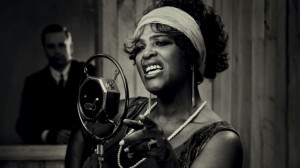 4) Ma Rainey’s Black Bottom. The National revisit August Wilson’s early play in his ten-play cycle of American black experience across the last century that they previously presented the UK premiere of back in 1989 to offer a stunning new production in the Lyttelton, starring Sharon D Clarke in the title role (pictured above). Lucian Msamati, just announced last week to play Salieri in the NT’s new forthcoming production of Amadeus, is extraordinary, too, amongst a superb ensemble that also features Clint Dyer and Giles Terrera. See my review for The Stage here. Website:  http://www.nationaltheatre.org.uk/shows/ma-raineys-black-bottom 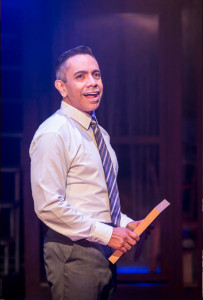 5) In the Heights. Lin-Manuel Miranda’s 2008 Tony winning Broadway musical returns to London in the exhilarating production first seen at Southwark Playhouse last year, and now at King’s Cross Theatre, where it is currently booking to October. It has just been Olivier nominated for Best Musical, with David Bedella (pictured right) also nominated for Best Supporting Performance. I can’t wait to see it again — and will be doing so next week!  See my review here. Website: http://intheheightslondon.com/ 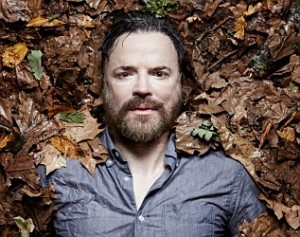 6) Uncle Vanya. There isn’t a more up-and-coming director in town than Robert Icke, associate at the Almeida, who last year directed the award-winning Oresteia there that transferred to the West End. Now he does equally revelatory work on Chekhov’s enduring masterpiece, bringing it into the here and now with startling immediacy, and with an astonishing lead performance from Paul Rhys in the title role (actually re-named Uncle Johnny in this version, pictured above). My review for londontheatre.co.uk is here. Website: http://www.almeida.co.uk/whats-on/uncle-vanya/5-feb-2016-26-mar-2016

7) The Father. French playwright Florian Zeller has gone from unkown to soon having three plays running simultaneously in London — The Truth opens officially at the Menier this week (see above), while The Mother, with Gina McKee, ended its run at the Tricycle last week. But it is is James Macdonald’s bleak but beautiful production of The Father, now back in the West End at the Duke of York’s until March 26 prior to a national tour, that has initiat this flurry of interest. Kenneth Cranham, who won the Critics Circle Theatre Award for Best Actor, is newly joined now by Amanda Drew as his daughter. See my reivew for The Stage here; Website: http://sfentertainment.co.uk/projects/the-father/ 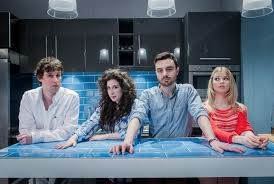 8) Bad Jews. Return run to the West End for Joshua Harmon’s brilliant, exorciating study of a family of young Jewish people and their claims and counter-claims for assimilation… or not. A ferocious, lacerating family comedy that’s like a gladiatorial contest, it was first seen at Bath’s Ustinov Studio, then transferred to the St James before moving to the Arts and now the Haymarket, where it runs to March 20, prior to a national tour. Even the poster ignited controversy, getting banned by London Underground. But the show demands to be seen. Website: http://www.trh.co.uk/whatson/bad-jews/

9) Welcome Home, Captain Fox! Rare sighting of a still rarer Jean Anouilh play is updated to the late 50s by playwright Anthony Weigh, and turned into a strange, funny and stylish evening. See my review for The Stage here; Website: http://www.donmarwarehouse.com/whats-on/donmar-warehouse/on-now/2016/welcome-home-captain-fox 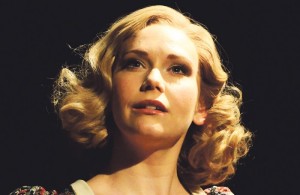 Mrs Henderson Presents. Transfer from Bath Theatre Royal of this touching, terrific new musical version of the 2005 British film set backstage and frontstage at the Windmill Theatre, which offered audiences live, nude (but completely immobile) women. The cast includes Emma Willimas (pictured above) as one of the showgirls, plus Tracie Bennett in the title role, originally played by Judi Dench in the film. My review of the original production at Bath last summer for The Stage is here, and my review of last week’s opening of the transfer is here. Website: http://www.mrshenderson.co.uk/