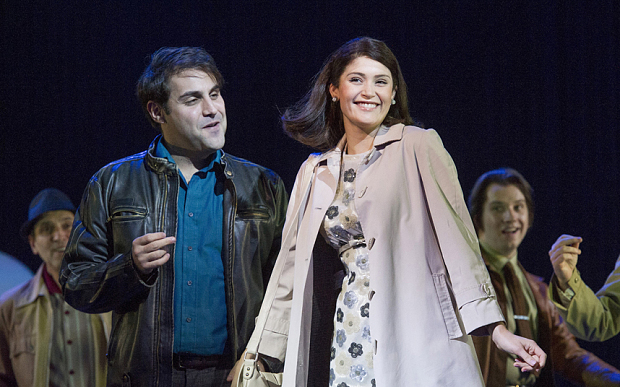 I’m obviously slackening off: in the three weeks I’ve kept this online diary now, viagra I’ve seen 10 shows, treat 7 shows and 6 shows respectively. And — shock horror — looking at my diary for the week ahead, I’ve actually got two nights that are (so far) unplanned!

But it’s really rather good to keep some flexibility in my diary; although parts of it inevitably fill up several months in advance, it’s always good to have a spare night or two in there to accommodate a surprise, a recommendation, something I want to see again, or simply to have a night off! (

Last night we stayed in and caught up on some long-ago recorded telly, including the sorrowful end of the brilliant Russell T Davies series Cucumber, and the joyous Bette Midler ITV Christmas special (pictured left)— at 69 years old, she’s still as dauntless and outrageous and stunning as ever!)

In the last week, I’ve been on formal reviewing duty for two big revivals of shows I’ve seen many, many times before: The Sound of Music and Sweeney Todd, originally premiered on Broadway exactly twenty years apart (in 1959 and 1979 respectively), but a musical world apart. The Sound of Music is this year celebrating the 50th anniversary of its even more celebrated film version’s release, which has made this one of the world’s most popular and enduring musicals of all time (only lately eclipsed by the even bigger film success of Mamma Mia!).

But seeing it these days is often a trial; the drenching of sentiment, those endless chanting nuns and its corny celebrations of lonely goatherds and whiskers on kittens, even though Julie Andrews is sheer enchantment as Maria. Seeing a delightfully fresh (and beautifully designed) new touring stage production, pictured below, at Wimbledon on Monday, however, was to be reminded of why the show simply works when delivered in safe hands. (See my review for The Stage here) 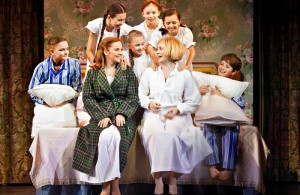 As I also commented in my review, “We’re never too far away from an R&H production – there’s also a current UK tour for Oklahoma!, Opera North is reviving its production of Carousel soon and a big Broadway revival of The King and I is about to open – but this tremendous staging will hold its own in the best company.”

We’re equally never far from a revival of Sweeney Todd either. Hot on the heels of the ‘pie shop’ production that originated at a real-life pie shop in Tooting last year and has now transferred to a meticulous recreation of it on Shaftesbury Avenue, a much, much bigger version first seen at Lincoln Center’s Avery Fisher Hall last year has been revived at the London Coliseum, with its New York stars Bryn Terfel and Emma Thompson (pictured below) reprising their roles as Sweeney and Mrs Lovett respectively, also joined again by the glorious Philip Quast as Judge Turpin who also starred in New York. ( 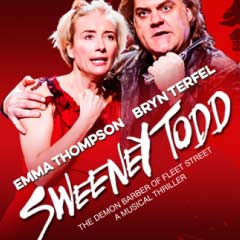 I reviewed this one for The Stage, too, and as I point out, you can’t really compare it to the pie shop version. I can only say you really need to see both!)

I’ve also reviewed two new plays: the RSC’s transfer of Oppenheimer to the West End’s Vaudeville Theatre and the premiere of journalist-turned-playwright Jonathan Maitland’s Dead Sheep at the Park; and tonight I’m seeing a revival of Godspell at Hackney Empire which I’ll review on The Stage website tomorrow.

I also saw (but didn’t review) an entirely delightful kids show, The Velvetine Rabbit, at Southwark’s Unicorn Theatre, in which a toy bunny comes to life for a young boy, and was thrilled to see an audience of parents and very young kids melt in its warm presence, just as I was brushing away my own tears.

It was also a week in which I spoke quite a bit about the act of criticism itself. On Monday, I was interviewed by James Lawrence for his Actor’s Podcast series (which you can listen to here), and yesterday, I took part in Winchester Theatre Royal’s excellent Young Critics’ programme in which they are seeking to develop a new generation of young writers (you can read my speech here)

As for the week ahead, I’m seeing two evenings of new musicals — the Landor’s series Songs from the Playground development programme on Monday which is showcasing the work of  Rebecca Applin this week, with a cast that includes Cassidy Janson, Stewart Clarke and Victoria Serra; and Apartment 40C, a new musical that was premiered at Fulham’s London Theatre Workshop but I missed there and am now happy to be catching at the St James Studio instead on Wednesday afternoon.

Also in the new music stakes, English National Opera are premiering a brand-new opera Between Worlds

(image left, inspired by the events of 9/11) that I’ll be seeing at the Barbican Theatre on Saturday; while elsewhere I am also catching a couple of revivals. I’ll also be at Greenwich Theatre on Thursday for the new tour of the off-Broadway musical Thrill Me that I last saw at the Tristan Bates Theatre  in 2011, and I’m seeing the Imelda Staunton Gypsy transfer to the Savoy Theatre on Saturday afternoon, ahead its formal opening there on April 15 which I’ll miss as I’m heading to New York a week tomorrow — straight after going to the Oliviers next Sunday at the Royal Opera House.

What’s going to win? In this week’s Stage, out on Thursday, I’ll be handicapping my own choices; and on Friday afternoon, Terri Paddock and I will be joining the Curtain Up Show on Resonance FM, being broadcast live from Shaftesbury Avenue’s Theatre Cafe, to talk about the Oliviers as well.

See you on and off the Avenue and the airwaves!
When you’re a champion, physician as I am, site of original British musicals, approved you’ve sadly all too often got a lot of cheerleading to do. Just look at this weekend’s entries vying for the Olivier for Best Musical: all but one of them are imports from New York, on or off Broadway – Beautiful, Memphis and Here Lies Love, against the sole British entry Sunny Afternoon. And two of those four musicals – Beautiful and Sunny Afternoon – don’t have original songs, either, but are recycled pop jukeboxes (albeit superior ones).

Somehow, and utterly unaccountably, Made in Dagenham failed to be nominated in the Best Musical category, and has limped away with just two nominations – for star Gemma Arterton and for Bunny Christie’s set design. The show is closing this weekend, to make way for another industrial workplace musical Kinky Boots, swapping the car factory of Dagenham for a shoe-making factory in Northampton, which arrives already festooned with Tony Awards.

Yet I’d honestly say that Made in Dagenham is the superior musical to Kinky Boots. When I reviewed the former for The Stage, I wrote, “The final number of the show is called ‘Stand Up’; this is a new British musical worth standing and cheering for, at last.”

And that’s what I – and a full Wednesday evening performance, open to the top of the house – duly did again last night at the Adelphi Theatre. I’ve now seen the show three times, and it just gets better. No, it’s not perfect – the show still, as I said the first time round, “lacks a killer tune of the take-home variety”; but it has tons of heart and a lot of craft.

It may owe a little too much to Billy Elliot, without the seamless staging, scenic and choreographic genius that illuminated that show so fantastically from Stephen Daldry, Ian MacNeil and Peter Darling respectively, but no one’s stinted here, either, in any of those departments, and Bunny Christie’s sets are a particular triumph of inventiveness, with their clever Airfix style panels and onstage production line.

It’s also performed with real panache and integrity by a cast that’s led by performers who feel shorn of musical theatre artifice; when’s the last time you saw a musical theatre leading man with a bit of a paunch, or a leading lady who exudes grit as well as glamour? Adrian der Gregorian and Gemma Arterton make both their characters utterly real; and they’re fantastically supported by a cast that also includes the wonderful Sophie Stanton, Sophie-Louise Dann, Isla Blair, Mark Hadfield and Naomi Frederick. 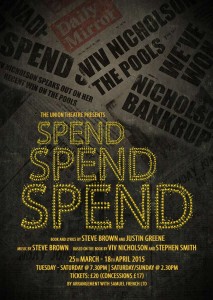 By coincidence, there’s another British musical, also set in the 60s and based on a real-life events, at the Union at the moment: Spend Spend Spend, which originally opened at the Piccadilly in 1999, that also pulses with authentic life, but likewise failed on its original outing. It’s done, of course, on a rather different scale to the original, but it has a lot of integrity and feeling.

Both these shows deserve support. I’m sad that Made in Dagenham has failed to rally the town, though happy to see it going with a bang; perhaps one day it will have a Union revival to prove how good it really is.