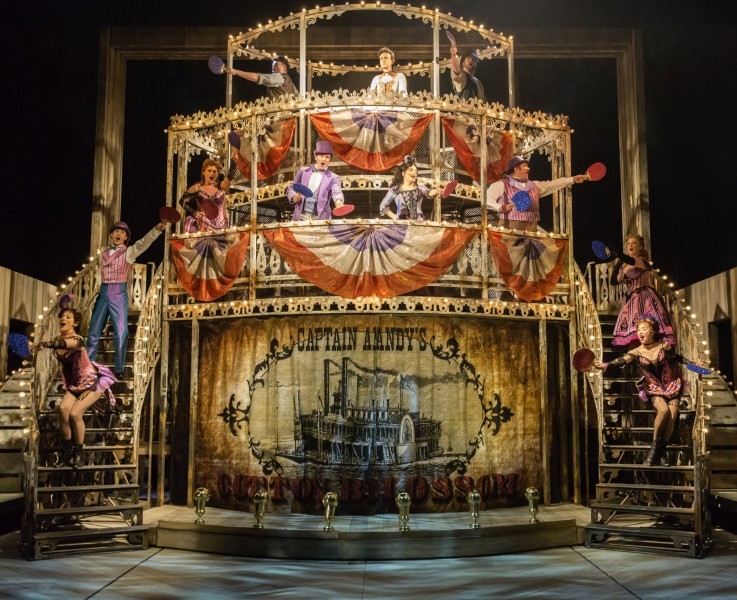 I’m still playing catch up a bit after my hip replacement (and then subsequent displacement). I managed to miss The Dazzle at the new Found111 (when a hospital appointment overran and then an Uber cab failed to arrive), rx and though I still want to catch it, I think I’ll wait till I can make the steep walk up and down to the theatre more comfortably (though the failure of the Uber cab to arrive on Thursday meant I ended up walking down 101 steps at St John’s Wood station instead to get home, rather than going to the theatre, so I pretty much did some of those steps anyway).??Here’s the last week in theatre reviews — from the shows I saw (The Lorax and Les Liaisons Dangereuses in London and Show Boat in Sheffield), to the ones I missed, whether unwillingly (The Dazzle) or willingly (Peter Pan, this year’s Wimbledon panto).

THE LORAX
(opened Dec 16 at the Old Vic) 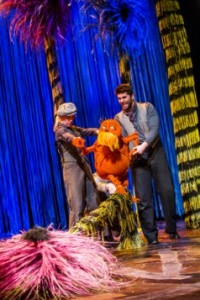 I was happy to see The Guardian and The Times concurring with me about the strengths of this adaptation of Dr Seuss. In my review for The Stage, I noted, “David Greig’s witty, constantly rhyming adaptation has, in common with his stage version of Charlie and the Chocolate Factory running in Drury Lane, a big help from original songs, provided here by Charlie Fink, former frontman of Noah and the Whale, that turn it at times virtually into a full-blown musical. Where Charlie also had powerful life lessons to teach and learn, The Lorax is a leaner family show with fewer special effects. But the cumulative effect is even more special as result.”

In a five star review for The Guardian, Michael Billington compared it to another show:” In its mixture of verbal wit and social purpose, this is the best family show since Matilda,” and suggests that, “In the end, the show appeals to our imagination without, like one or two seasonal entertainments, sating it. It also points out a moral without hitting us over the head with its good intentions.” ??In The Times, Ann Treneman tries out her own rhyming skills: “David Greig’s ability to rhyme is prime. His Seuss isn’t obtuse. His smogulous smog goes the whole hog. The Lorax is inventive, gorgeous to look at and the puppetry magical.”

Only Dominic Cavendish in the Daily Telegraph is slightly underwhelmed, calling it a “fun but eminently disposable family show,” before going o on to say, “The evening throws down the gauntlet to the younger generation to save the planet. I assume they will rise to the challenge once they’ve gulped their drinks and ices and vroomed and zoomed home: the show inevitably (hypocritically?) stimulates the consumerist activity it part-preaches against. But overall I’d say it’s “waste-neutral” – it doesn’t squander vast resources, but doesn’t add much to the sum of things either.” 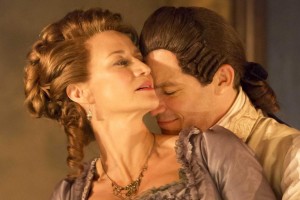 The Sun — yes, the Sun — has returned to regular theatre reviewing, putting former People newspaper editor Bill Hagerty back onto a beat he used to occupy for them; and his review is accompanied by three pictures of someone who isn’t even in the show: Michelle Dockery, who in two of them is pictured with her late fiancee. The opening of this production, in which she was to have starred before withdrawing last month, took place the day after her his funeral; and the day of what would have been his 34th birthday.

That back story takes three paragraphs to explain; then there are another three on this production. “It would be foolish to imagine that the tragedy could leave the cast of Christopher Hampton’s famous 1985 play unmoved,” writes Hagerty. “So they, and in particular Elaine Cassidy, who unenviably stepped in to replace Ms Dockery, deserve enormous respect for delivering acting of the highest standard in such difficult circumstances.”

Meanwhile in The Sun’s stablemate The Times (behind paywall), its critic Ann Treneman takes two potshots at the French in her opening paragraph alone. I’m not sure if its supposed to be funny, but it is (a) stating the obvious; and (b) hardly illuminating. “This is not a simple story, but then it is French. It’s about decadence, deceit, big hair and sex on a chaise. Actually the chaise got quite a workout last night at the Donmar, some of it unnervingly close to us, as we watched two people do their absolute best to destroy what is good in life…. Their names are the Marquise de Merteuil and the Vicomte de Valmont, quite a mouthful but then, as noted, it’s French.” And (c), it’s not funny either.

Slightly unnervingly, Dominic West (pictured above, with co-star Janet McTeer) wasn’t fully on top of his lines on the opening night (nor, a friend reports, at yesterday’ matinee either), and Susannah Clapp hilariously nails the problem as a choice without pointing a specific finger in her review for The Observer: “Dominic West potters round the part, with long, unnerving pauses. At times this seems rather brilliant. As if he were so languidly secure that he is just dropping in on seduction. Often it has a muffling, condom-like effect on the action. Perhaps he should try the rhythm method.”

Finally in a five-star review for the Evening Standard, Henry Hitchings calls it “Theatre at its most seductive and sinister….a pitch-black comedy of manners, which radiates the very opposite of seasonal cheer. ” 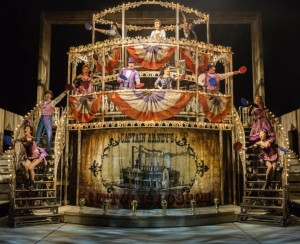 At Sheffield’s Crucible, artistic director Daniel Evans is doing another of his vintage musical revivals, following previous Christmas season successes with My Fair Lady, Oliver! and Anything Goes. As I noted in my review for The Stage, “This year he’s pushed the boat out – in every sense – by choosing another less frequently done standard Show Boat to set sail on the Crucible’s deep thrust stage, and the result is an evening of sweeping magnificence that soars in every department.”
In a five-star review for the Daily Telegraph, Claire Allfree praises both the show and production. Of the show, she says,  “Spanning several decades from the late 1800s, it tackles racism, alcoholism, women’s rights, gambling and the dawn of modernity. These were rare subjects back then for musical theatre, and in that great American musical tradition, Show Boat effortlessly views them through the telescoping lens of show business itself. Kern’s score is sublime, a groundbreaking mix of high opera and popular show tunes. Under the direction here of musical supervisor David White, every sound is lush, sonorous and extravagantly beautiful. Indeed, Show Boat is waterlogged with feeling.”

And of this staging, she declares: “This is a terrific production, full of seamlessly integrated colour and detail. It is the kind of show that leaves you feeling choked, shivery and on an absolute high.”

In another five-star rave for The Observer, Clare Brennan applauds the cast: “Equal as are all in the 24-strong ensemble, space constraints mean I can single out but a few. Among the lovers: Michael Xavier’s Gaylord, so dashing, so chastened, perfectly counterbalanced by Gina Beck’s strong, true-loving Magnolia; [Emmanuel] Kojo’s unapologetic Joe laughed at and railed at by Sandra Marvin’s self-strong Queenie; Rebecca Trehearn as Julie, simultaneously broken and sustained by love.”

In The Guardian, Alfred Hickling is also impressed, saying that the production is “visually and musically of the highest standard. Designer Lez Brotherston provides a balustraded steamer that elicits its own round of applause. And the performances attain a standard that we have come to expect from Evans’s superlative Christmas productions.” 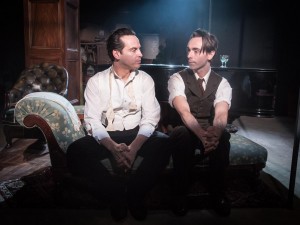 This British premiere of Richard Greenberg’s off-Broadway play is being staged at Found 111, a newly created space on the Charing Cross Road that plays its own unique part, along with actors that include Andrew Scott and David Dawson (pictured left), in setting the atmosphere.

In The Stage,  Natasha Tripney sets the context:

“Simon Evans’ production has the feel of an event about it. It takes place in the former Central St Martins building, the intimate space reached by winding concrete stairs. More could probably have been made of the room and the cluttered design doesn’t really give you a sense of the extent of the brothers’ hoarding habits, but it’s a joy to watch actors of this quality in such close quarters,”

And Ann Treneman also draws attention to the space itself in The Times, “There is something thrilling, even a tiny bit illicit, about seeing this play in this strange eyrie, although inevitably the place will end up suffering from hipster-itis. If you can ignore that — and I did — then The Dazzle is the theatrical equivalent of a secret gig. You emerge feeling as if you’ve seen something special because, actually, you have.”

In a five-star review for The Independent, Paul Taylor applauds play, production and performances equally, says of the two leads who play a pair of siblings, “The consummate acting of Andrew Scott and David Dawson takes you right into the nervous system of a relationship that is also piteously imbalanced.” He has particular praise for Dawson: “In what is the performance of the year for me, Dawson’s pointy face is never still as Homer masks his hurt in frantically frustrated ironies and acerbities.” 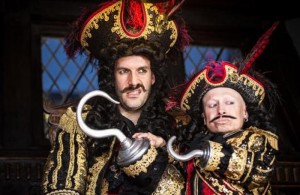 I already drew attention to my Stage colleague Natasha Tripney’s review of this in my Diary of a theatre Addict here, in which she wonderfully wrote that it contained “jokes so old you could extract DNA from them and open a theme park”.

In a one-star review for The Times, Sam Marlowe also pans it:

Two shows a day for a month and a half,” moans the comedian Jarred Christmas in the second act of this lacklustre show. He and his panto cohorts urgently need to get over it and pull themselves together — because it looks as if they’ve already given up….At the performance I attended, cues and props were repeatedly dropped, lines were fluffed, and stuff-ups occasioned bouts of on-stage sniggering, while those of us watching struggled to see the funny side. If Ian Talbot’s production is this desultory in early December, I shudder to think what sort of sorry shape it’ll be in by Boxing Day….This stinker would depress even the jolliest Roger.