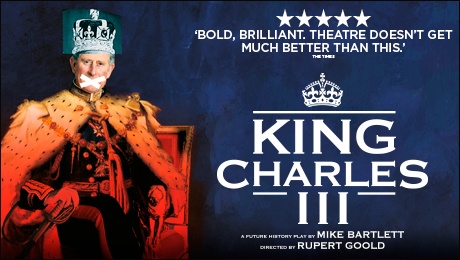 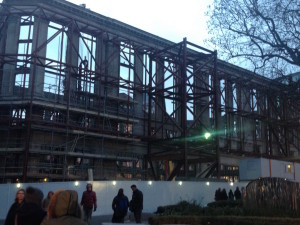 ?I was brought up short walking through Leicester Square today to see 48 Leicester Square — a building I used to work in at the start of my career — reduced to a skeleton shell of its exterior frame only. I had joined Dewynters, page the ad agency that specialises in West End theatre advertising, approved marketing and promotion, in 1986, fresh from University, as its publishing manager in charge of theatre programmes and souvenir brochures.

When I first joined, the company was based in Bruton Street in Mayfair, just off Berkeley Square, but within a year or so they moved to 48 Leicester Square — putting them in the very heart of the West End that they represented. And there they remained for the next twenty-something years, on the top (8th) floor. I occasionally visited — they used to give us house room to record sessions for Theatrevoice there — before they moved to their current premises at the corner of Waterloo Bridge and the Strand a couple of years ago.

So it was a shock to see that an era had truly ended in Leicester Square. And it’s far from alone, it seems: on the next corner, the Odeon West End is now dark, too — no doubt awaiting redevelopment. 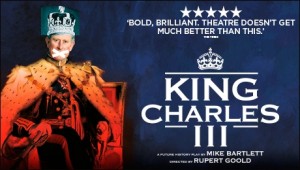 Unlike other awards ceremonies that I’m also connected to, where we debate, argue and eventually agree on who should take home the prizes, the Critics’ Circle Awards happen entirely without outside influence or horse-trading: we each cast our votes individually by private ballot, which are then collated by our awards administrator Catherine Cooper to produce winners based on the largest number of votes cast in favour of each candidate in each category.

Theoretically, of course, the fifty or so active ballot papers that are submitted could be cast in favour of 50 different candidates in each category; but in reality, favourites always emerge.

As chairman, I get to see each critics’ individual ballot papers — as I have to work out who to invite to present each award, and of course I can only ask critics to present an award to someone they’ve actually voted for — and it makes for interesting reading! I’m not going to reveal who voted for what here, but I can at least tell you what I voted for. And it turned out that, out of the eight categories, my votes contributed to wins in three categories only (Best New Play, Best Actor and Most Promising Playwright)!

BEST ACTOR : MARK STRONG for A View from the Bridge (Young Vic)

BEST DESIGNER : BUNNY CHRISTIE for MADE IN DAGENHAM (Adelphi Theatre)

The Jack Tinker Award for
MOST PROMISING NEWCOMER other than a playwright : LAURA JANE MATTHEWSON, actor in DOGFIGHT (Southwark Playhouse)