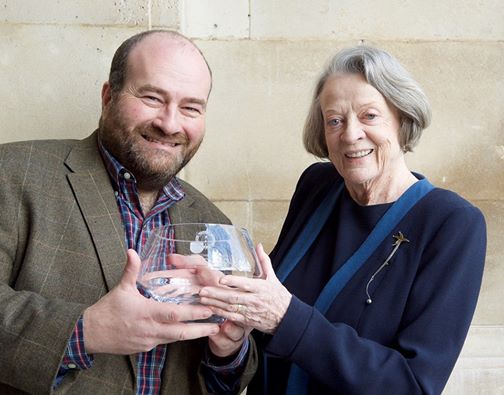 It’s been three weeks since I was last here, this so today I’m going to catch up with the rest of March, and from now on I’m going to update this column on a monthly rather than weekly basis! ??In the period covered by the previous column, I’d seen 49 shows in 6 weeks; now, in 3 weeks, I’ve seen a more modest 20, so perhaps I’m slacking!

But it has also included trips to Birmingham, Bristol, Bromley (twice) and Cardiff; I’ve also seen three films, interviewed Katie Brayden and Daniel Evans, and co-hosted a lunch for Maggie Smith to honour her with this year’s Critics’ Circle Award for Distinguished Service to the Arts.  And in the next three weeks, I’ll be in Manchester, Watford and Colchester, plus a week in New York, so my diary is as full as ever! 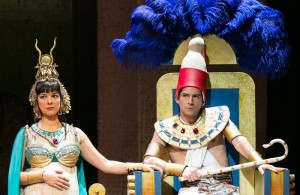 The period covered here started with a run of bad shows: on two nights running, I saw shows that both got one-star reviews from me – Miss Atomic Bomb at the St James (reviewed here), then Not Moses at the Arts Theatre (reviewed here, pictured right). And then on the third night, another show opened that I wasn’t reviewing but I would have given one star to if I had been (If You Kiss Me, Kiss Me at the Young Vic).

There’s no pleasure in awarding the lowest rating, as I wrote here; and though I can understand that actors may find it painful to be reminded that they’re in a poorly received shows, there’s nothing like blaming the messenger, as I have been, by one of them on Twitter for retweeting a negative review by someone else. As Somerset Maugham once perceptively said, “People ask for criticism, but they only want praise.” The same actor has been only too happy to retweet more favourable comments!

But it’s not been all awful; I also re-visited the ENO’s five-star Akhnaten (and paid £100.50 for my side dress circle seat for the privilege — proof of just how much I loved it the first time!) and the wonderful In the Heights at the King’s Cross Theatre, and returned also to see The Book of Mormon for the first time since its London opening night, as well as the five-star Mamma Mia! as it launched a new UK tour at Bristol. (that I reviewed here). 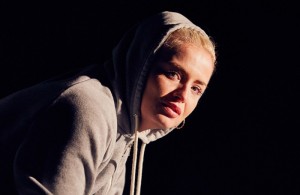 I also finally caught Iphigenia in Splott (pictured left)— I managed to miss it during is London run at the National’s Temporary Theatre, but at the urging of a friend who said it was one of the best shows he’d seen in ages, took myself to Birmingham instead to catch it at Birmingham Rep’s studio Door theatre. And it was definitely worth the effort; so was another one-person I saw the very next night at the Young Vic, Living with the Lights On; I wrote about both here)

Then there’s Sarah Kane’s Cleansed, controversially revived the National, which got everything from one-star pans to five-raves, so of course I had to see for myself — as  I wrote here, “A one-star review is sometimes a challenge and a provocation as much as a criticism. It dares you to see a show for yourself. I get far more reaction from a one-star review than I ever do from a five-star one.” 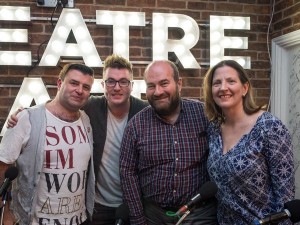 As a critic, I understand not only that critics are far from infallible — what we write is, of course, always a mater of opinion, though hopefully of informed opinion — but that we only part of the conversation around the shows we see, not the beginning and end of them! And I’m delighted to be part of that ongoing conversation in my various outlets, from here to Twitter, in print and online, and on the radio. In the last few weeks, I’ve participated actively on the radio in shows on national radio (appearing on Will Gompertz’s BBC5 Live Sunday arts programme on March 27), community radio (appearing on Resonance FM’s weekly theatre show Curtain Up Show, presented live from the Theatre Cafe on Shaftesbury Avenue, that can be heard online here,  pictured above with co-hosts Tim McArthur and Nathan Mathews and my MyTheatreMates co-founder Terri Paddock) and I also do a new live (very) early morning spot on talkRADIO with breakfast host Paul Ross every week on Tuesday morning around 6.45am. 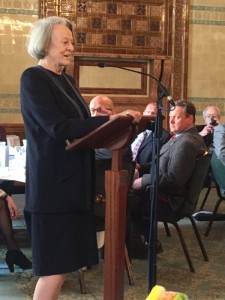 And I also know that what critics say resonates with actors. Last week at the Critics’ Circle lunch to honour Maggie Smith, she told a marvellous story as she acceptd her award (pictured left): “I know people say and I’ve certainly said I don’t read the critics, which a lot of actors say very airily,  but believe me, you get to know what’s there. But I did learn a lesson once— I was sitting in a hotel with Frank Finlay who was a wonderful actor, we were filming Othello, but there was a newspaper there and I read it; there was a review in there and it was absolutely lethal and truly frightening. It was for The Master Builder at the National, and I remember bursting into tears. Frank gave me a great big hug and said, ‘what you must think about is how many actresses you’ve made very happy.’ I don’t know if the critic who wrote that is here, but it was a very good lesson.”  And to us, too.

I also made a rather marvellous discovery: as we exchange notes on our respective hip replacement operations last year — she had hers done in October, I followed in November — it turned out that we were both operated on by the same surgeon Mr Robert Marston! What a small world!