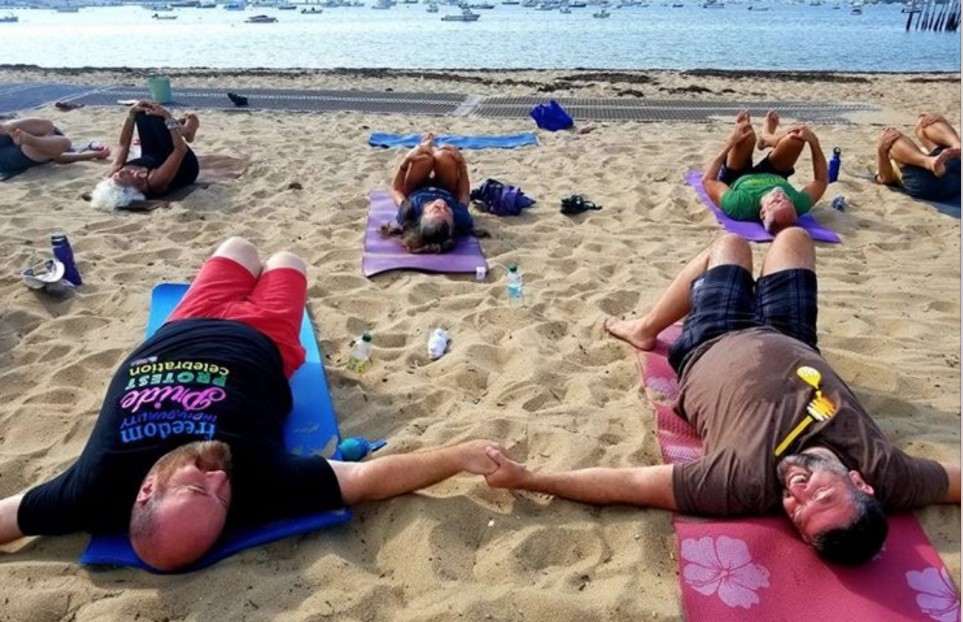 In talking about addiction treatment and recovery through 12-step fellowships, fellows are made to confront their addiction by defining it upfront when they introduce themselves: “My name is Mark and I’m a theatre addict,” would be my admission in this column (though I do actually go to another group where I define myself differently).

But we are also always at pains to define ourselves as ‘recovering’ addicts, never recovered addicts: our sobriety (from whatever it is we are addicted to) is one day at a time. And even if I have found some relief from my habit of compulsive theatregoing that I typically adopt in London and New York whenever I’m there, the temptation is never too far away, even when I’m in as glorious a place as Provincetown. So I’m particularly proud of myself that despite contemplating a quick jaunt to New York this coming weekend, I’ve resisted it (so far).    There’s plenty to keep me occupied here — and some of it has surprised and enriched me in ways that are different to yet another theatre jaunt to New York. 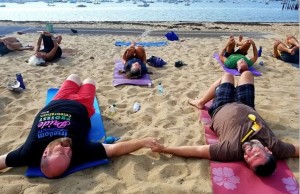 Today, for instance, we started the day at 8.30am with a session of yoga (right) on the public beach in the middle of town, right beside MacMillan Wharf where the passenger ferries from Boston come into and the whale watching boats depart from.

This stretch of beach is also right in front of the Crown and Anchor, P-town’s most expansive resort hotel that contains restaurants, bars, a nightclub, a beachside swimming pool, and two performance spaces. The larger of these rooms, the Paramount, provides one of the town’s main showcases for headliner performers.

Both Rapp and Eder did sets that were more like informal concerts than intimate cabarets, putting the emphasis on the music rather than the chat and context that cabaret usually favours. And it was interesting, too, that neither have achieved the star wattage that their first Broadway outings seemed to be anticipating. Barbra Streisand, for instance, became a global superstar after she first took Broadway by storm in her early 20s in the original productions of I Can Get It for You Wholesale and Funny Girl. And Eder, with a powerhouse voice that could give Streisand or Celine Dion a serious run for their money (note), might have once been a candidate to follow in her footsteps. 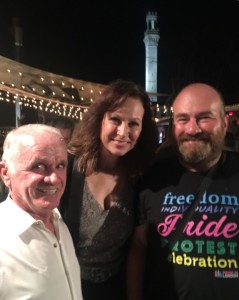 But Eder (pictured right, with Ken Lonergan, P-town official town crier, and myself), who radiates comfort in her own skin (in a way that Streisand’s precisely curated appearance simply does not), has a breezy confidence and sheer joy in singing that makes it seem much less like hard work. And in a programme that included a lot of Broadway songs (unlike the last time I saw her, also in P-town in 2011, when she relied too heavily on her former husband Frank Wildhorn’s work), she tore into songs like ‘I, Don Quixote’ from Man of La Mancha and of course her signature hit Someone Like You (from Wildhorn’s Jekyll and Hyde that she originated on Broadway) with passion and ferocity; but there was also room for more tender standards like ‘Almost Like Being in Love’ or ‘Over the Rainbow’.

Rapp, by contrast, feels more intense and complicated; he specialises in rock songs with feeling. That was a trademark, of course, of the songs he originated in Rent, and it remains forever moving to hear one its original singers performing Without You, a tender meditation of lost romance; as well as that great anthem Seasons of Love. In 2012 Rapp brought a one-man show (also called Without You) to Edinburgh and then the Menier Chocolate Factory that provided an autobiographical journey through his life (and in particular coming to terms with the loss of his mother during the run of Rent); though he mentions her again in this concert, as well as the boyfriend he met while on tour in If/Then in LA two and a half years ago, this show is more driven by the music than personal revelation. (There is, understandably, no mention at all of Kevin Spacey — whose career downfall he precipitated last year by revealing his early teenage seduction, when he was just 14, by Spacey who was 26 at the time). 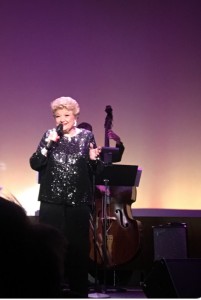 Meanwhile at the Arthouse, a great season of classic cabaret and Broadway stars in intimate surroundings reached a peak with Marilyn Maye, now 90 years old, holding the audience rapt for 100 minutes of gorgeous song and anecdotes. I previously witnessed the likes of Barbara Cook and Elaine Strich performing into their late 80s, but was saddened that for both of them the last time  I saw either was a bit of an ordeal: though I loved being in their presence, as ever, both suffered significant memory problems and grew frustrated with lyrics that they stumbled over. There were no such difficulties with Maye: just sheer joy at still singing for her own pleasure — and ours, too.