Interview with producers David Stone, Michael McCabe and Helen Dallimore, who originated the role of Glinda in the West End, originally published in the Sunday Express, October 2006 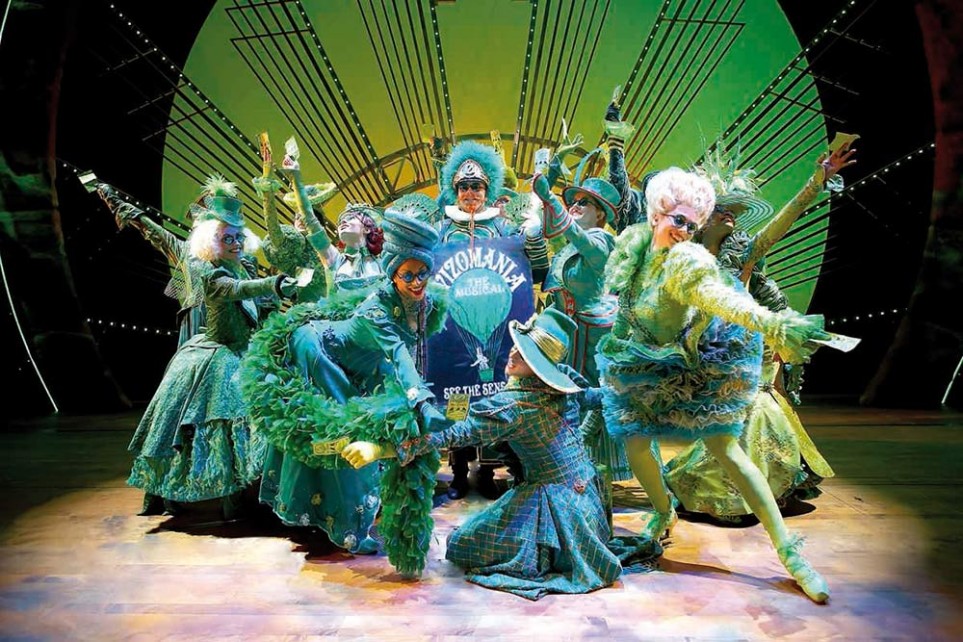 Broadway hasn’t sent the West End a bigger, pills more eagerly anticipated or expensive new musical than Wicked since The Producers, buy and its certainly become New York’s most commercially successful musical since then, too. Week in, week out, Wicked takes more money at the box office on Broadway than any other show – a whopping $1.4m every week – and there are highly lucrative companies also currently performing the show on a US national tour and in Chicago, with a fourth one set to open in Los Angeles next February. The show, which originally cost $14million to put on, recouped its costs in 14 months.

Now the international roll-out of the show has begun in London, with Japan and Germany to follow next year, so another global phenomenon has been born, like the British-born megamusicals Les Miserables (that next weekend becomes the longest-running musical of all time in the West End), Cats, The Phantom of the Opera and Mamma Mia!

“I don’t think anyone in their wildest dreams could have imagined this”, says Broadway producer David Stone, who says that standing at the back of the theatre and hearing people respond to the story is the most fun he has. “Looking at the grosses is lovely, but nothing compares to that.” He remembers that rush of excitement from the moment the show was first put in front of an audience in San Francisco before it went to Broadway: “When this beautiful, young, idealistic green girl ran downstage, the audience just went wild,” he says, referring to the character of Elphaba, who later becomes the much-maligned Wicked Witch of the West in The Wizard of Oz. “This was a character that people had feared more than anything else, but in one instant, the audience understood she was nothing like that and she was more complicated than they thought, as maybe we all are. And that such a complicated thought should come together in an entire audience is something that can only happen in the theatre.”

And that, he feels, has been the key to its success. But while he says that The Wizard of Oz story is part of the “DNA of everyone in America”, he acknowledges that he feared that it might not have quite the same resonance over here. “So this is a very important production for us, to see how it will work outside America.”

He’s got some £7million riding on the experiment. As the show’s London executive producer Michael McCabe points out, “one of the big selling points of this show is that you see where your money goes – every costume is hand-made and hand-sewn and individually tailored to each character, for example.” But it’s all in the service of a piece of storytelling, and McCabe adds, “The show came at a time on Broadway, and the same thing is true here, when it is the first genuinely new musical in a very long while, but it had this point of reference, The Wizard of Oz, that people understood, so it was not like seeing a new musical where you had no clue about what it was about. Yet its newness was a huge appeal, too.”

And that’s also the appeal of its two main stars: Idina Menzel, who created the role of Elphaba on Broadway, is reprising her Tony-award winning performance in London, where she is unknown; and she is paired with the Australian-born Helen Dallimore, who came to London two years ago after a successful career in theatre and television at home and is making her West End debut, as Glinda, the “good witch”.

The 34-year-old Dallimore admits, “the last two years have been a hard slog actually – coming from a place where I worked regularly and people knew who I was, into a situation where I was starting again from scratch, was humbling. I ended up having to do jobs that I hadn’t done since before I trained as an actress 13 years ago. I gave myself time limits and then kept stretching them – I had this nagging feeling that I had to wait a bit longer, and it wasn’t the right time to go back to Australia yet.” Her patience finally paid off. Producer McCabe fondly remembers the surprise of her first audition (she went through eight in all): “It was a joy when she walked into the room – none of us knew who she was and she was absolutely fantastic.” London audiences are now feeling the same way.