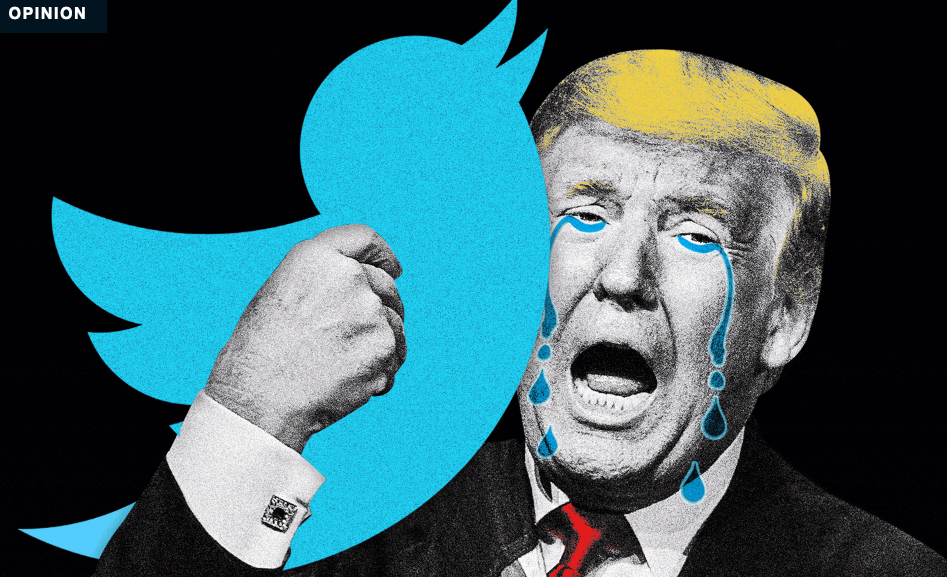 It’s amazing, isn’t it, how much more peaceful the world suddenly feels without Donald Trump invading our thoughts every few minutes or hours, with a fresh assault on norms and decency?

Last weekend Emma Brockes spoke for many of us in a Guardian column in which she wrote:

“The daily anger spike is gone, leaving in its place a flat, sour, hungover feeling, and a sense of not knowing quite what to do.”

This replaced the enormous sense of relief I felt just two days after Biden’s inauguration, when I tweeted this:

But it has to be said Trump was a comic gift to the very last, with his final list of presidential pardons including this one imagined by actor Peter Hannah, last seen in the West End in Waitress:

Trump has pardoned Cats The Movie. The final nail in the coffin!

However, even with his fat fingers now unable to twitch on Twitter, he’s still able to to write letters the old-fashioned way, and one he wrote on Thursday this week, resigning his membership of the Screen Actors’ Guild ahead of a disciplinary hearing at which he was expected to be expelled anyway, is a classic of unbridled insult, ego and shame. 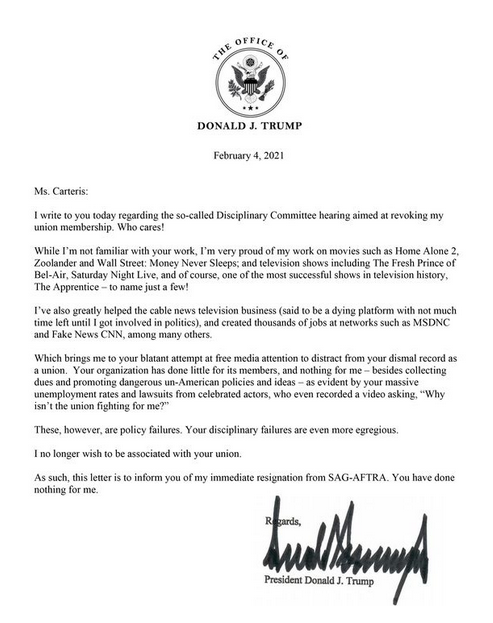 Addressing SAG President Gabrielle Carteris, who is an actor, he wrote to cast maximum shade on her own credits (which include Beverley Hills 90210) while boasting of his own:

“While I’m not familiar with your work, I’m very proud of my work on movies such as Home Alone 2, Zoolander and Wall Street: Money Never Sleeps; and television shows including The Fresh Prince Of Bel-Air, Saturday Night Live, and of course, one of the most successful shows in television history, The Apprentice – to name just a few!“

He also claimed that he had “also greatly helped the cable news television business (said to be a dying platform with not much time left until I got involved in politics), and created thousands of jobs at networks such as MSDNC and Fake News CNN, among many others.”

Never mind what he should have done for the country; he was more concerned, as ever, with what he did for the ratings of the media business.

And before he lost the presidency, he actually lost something even more valuable: his bully pulpit of Twitter. A column for the Daily Beast published on Wednesday was headlined thus: 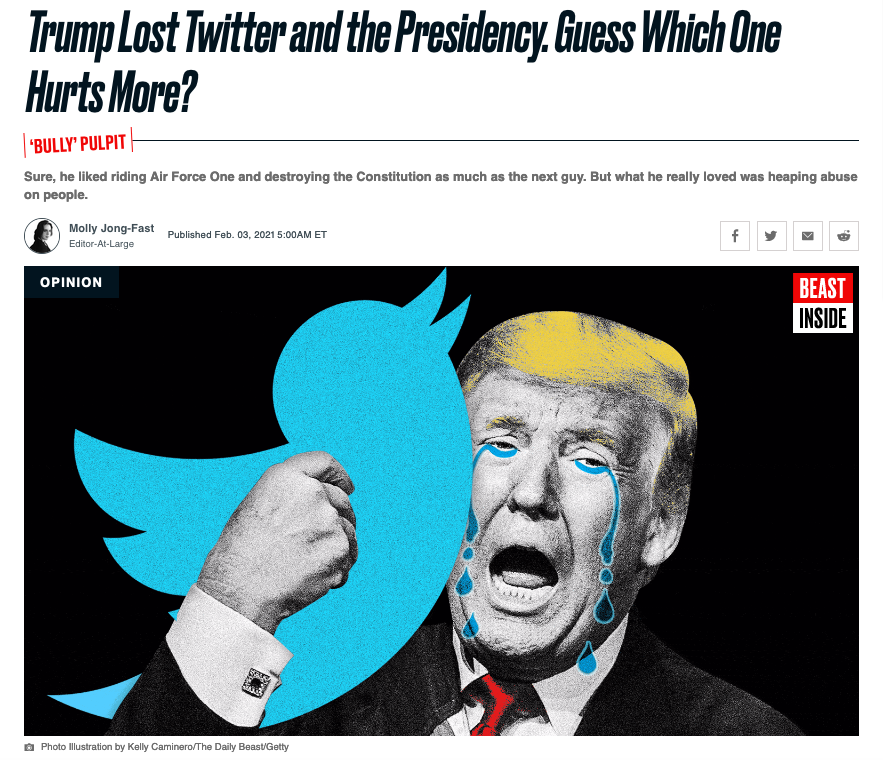 “Trump was never particularly interested in governing, nor in the wealth of confidential information the president is entitled to (he refused to read the presidential daily brief, relying on oral briefings). Since legislation ended up being too complicated for the reality television host, the only power that Trump wound up able to use was the attention that the president of the United States commands with his tweets. Trump was able to target that attention like the Death Star toward his enemies. And when he was deplatformed, he lost all his power, as if his iPhone were suddenly made of Kryptonite.”

In the column, Evans writes:

“The effect of exuberant and unalloyed celebration, of finality, was palpable. As a comedian with zero musical talent or any other secondary skills to resort to, I will just bitterly observe that the actual video is powerful and affecting for the same reasons that parody songs culled from stage shows always are — because you’ve taken a much-loved chunk of the most emotionally manipulative art form there is, musical theatre, and made up a few new words. The magic is baked into the music. The genius of Claude-Michel Schönberg could be adapted to sell carpet cleaner and you would still feel emotionally compelled to comply.”

And he went on to say:

“But the fact is, despite all the heady jubilation, I suspect comedians like Corden will miss Trump when he’s gone. What will they laugh about without him in office? How will they sustain the OMG count that kept their monologues fuelled? They might have to start turning their comedic lens onto members of their own political camp — which is no mean feat after an era where the comedy pretty much wrote itself.”

And now begins the reckoning with his shocking legacy that culminated in the insurrection he called for on the Capitol. His impeachment trial for that begins on Tuesday in the same building.

I try to begin each day with a little bit of positive affirmation by tweeting out the names of those who are celebrating their birthdays that day. And yesterday, those included film director and actor Christopher Guest, astrologer and personality Russell Grant and actor Michael Sheen.

Guest created one of the very best theatre characters ever seen on film in his spoof of small-time amateur theatricals aspiring for the big time in Waiting for Guffman, in which he directed and also played the director of the show within-the-film, Corky St Clair:

I replied, asking Simon Evans — who is no relation to The Spectator columnist above but is the co-writer and director of TV’s Staged, in which he plays a version of himself — to make this happen.

If this happens, you can thank Ash (as Gregory is universally known) and myself….

Yesterday may have been the annual #WorkingNakedDay:

But tomorrow is, even more importantly, #MusicalTheatreTVNight:

I know we don’t have any choice about whether or not to stay in at the moment, but with this sort of programming, it might not be so bad….