It’s hardly an original thought to describe a lot of actors as narcissists. The constant craving for attention partly goes with the territory; so is the neediness it implies. But it is also an even sadder fact that they will sometimes do ANYTHING to get it.

“The malignant narcissist ‘needs’ attention. Just attention. Any attention in the form of a reaction. He prefers adoration, but will settle for your anger. So long as he’s provoked you. He wants and ‘needs’ the attention he didn’t get as a child.”

Which, of course, is the pathology of Donald Trump, who in just over forty-eight hours from the time this column is published will cease to be POTUS, a position that is routinely regarded as the most powerful person in the world, and become just another impotent former leader: one who has, moreover, been deserted now in droves by his own party after his stupid stunt at the Capitol to undermine democracy and seize power failed, for which he has now been impeached for the second time by the House of Representatives, with a trial to follow in the Senate after his departure from the role. 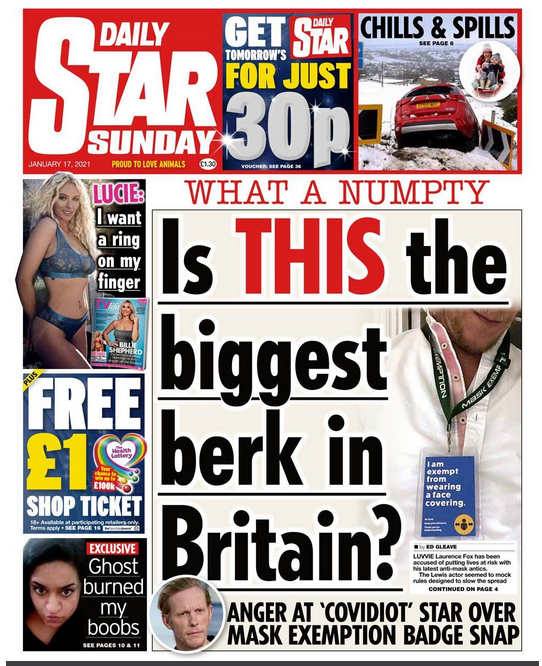 Also failing dismally in his attempts to troll the nation is one-time actor Laurence Fox, who as the Telegraph’s Tim Stanley said on a late night newspaper review on Saturday night, has gone for “vice signalling” instead of virtue signalling in his behaviour, after the Daily Star Sunday edition led with a front page story (pictured above) that was headlined “Is THIS the biggest berk in Britain?”, after he was pictured wearing a ‘mask exemption badge’ that he admitted he’d ordered from Amazon, after “a long period of consultation with myself, an extended review period and proper due diligence conducted.” 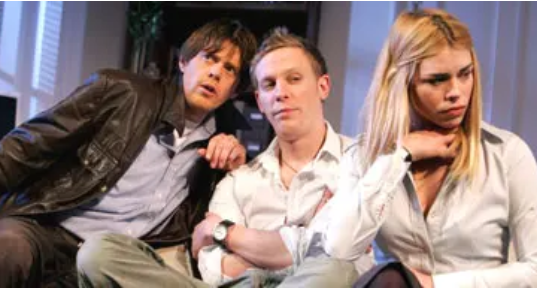 Back in 2007, when Fox was dating Billie Piper (before she became his wife), I interviewed him and Kris Marshall when they were appearing in a West End revival of Christopher Hampton’s Treats alongside Piper, pictured abovel, and this exchange was particularly revealing.

Me: You seem to have a close relationship.
Fox: Some might say that it’s too close. There is some man love going on. We’ve known each for six years, since we did a film [Deathwatch] in Prague. We had all those evenings to kill….
Me: Is it a coincident that you’re cast together in this play?

Fox: Yes — we’re usually up for the same fucking part — it’s happened for a while.

Me: But you’re not the same type, exactly, are you?

But in those days, Fox also took the legitimacy of working on stage seriously. When I asked him about the different challenges of working on screen and the stage, he replied thoughtfully:

“For me, telly is like heavy drinking, whereas plays are like going to the gym – you can’t do one without the other, otherwise you end up fat and slow as opposed to be a bit more lithe and faster…. It also enriches you – One of great things about doing a play is walking away from it at the end and on to next job and being so sharp. Your brain has had to work in a sustained way that you don’t need to in television.”

Perhaps this problem right now, given that his brain doesn’t appear to be working at all, is that he’s been away from the theatre for way too long….

Charity begins at home….
I recently wrote here of the astonishing generosity of Broadway playwright Jeremy O. Harris, who after a bumper year of earnings decided to pay a large chunk of it forward in contributions to initiatives that supported other young, emerging playwrights. As he commented to the New York Times, “The fact that I made just under a million dollars this year after literally making no actual income for a decade feels like a really complicated thing for me to make sense of. I don’t know if this money will be the only money I make for the next two years — I don’t know what the decade will bring for me. But I felt no qualms about giving this much of it away, because it is more money than I ever imagined I would make, and it’s also more money than I need. And so it feels imperative for me to work and imagine new ways to take care of the people around me.” 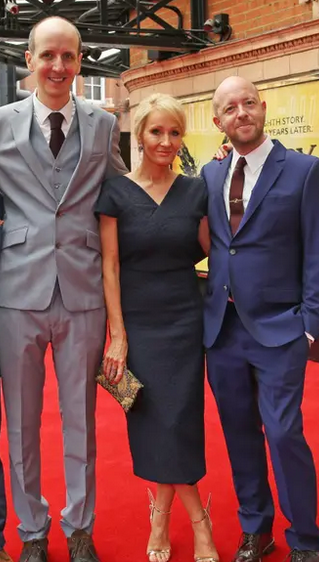 O.Harris is just 31; Jack Thorne is a bit older at 42, but he, too, has found phenomenal success both on screen (where he has won five BAFTAs, including for This Is England and National Treasure) and stage, as co-writer (with JK Rowling and John Tiffany, all pictured above) of Harry Potter and the Cursed Child. Last week it was reported (in the Evening Standard) that he’d committed to matching the funds raised from the online audience for his adaptation of A Christmas Carol, which had its fourth consecutive run at the Old Vic over Christmas. The money goes to support the work of Food Cycle, which reuses ingredients that would have gone to waste to create healthy free meals for people that need them across the UK.

According to Old Vic artistic director Matthew Warchus (who also directed A Christmas Carol), Thorne got “a lovely surprise” when they told him how much he would have to give. Warchus tells the Standard, “He was absolutely delighted. I know it’s a hell of a lot of money and it is extraordinary generosity on his part and his wife. His email when we told him how much we raised was saturated with joyous swearing.”

Finally, while theatre may face a slow comeback, given the currently escalating waves of death, composer and theatre owner Andrew Lloyd Webber remains an optimistic voice.

Last week, he told Nick Curtis of the Evening Standard that he foresees “an explosion of live theatre” once theatre doors can open again, although he realistically cautions, “We won’t have a lot of people from overseas in London this year, so it will depend on whether or not people support live entertainment across the board, music as well. I would like to beg that everybody doesn’t just go out and party in restaurants.” 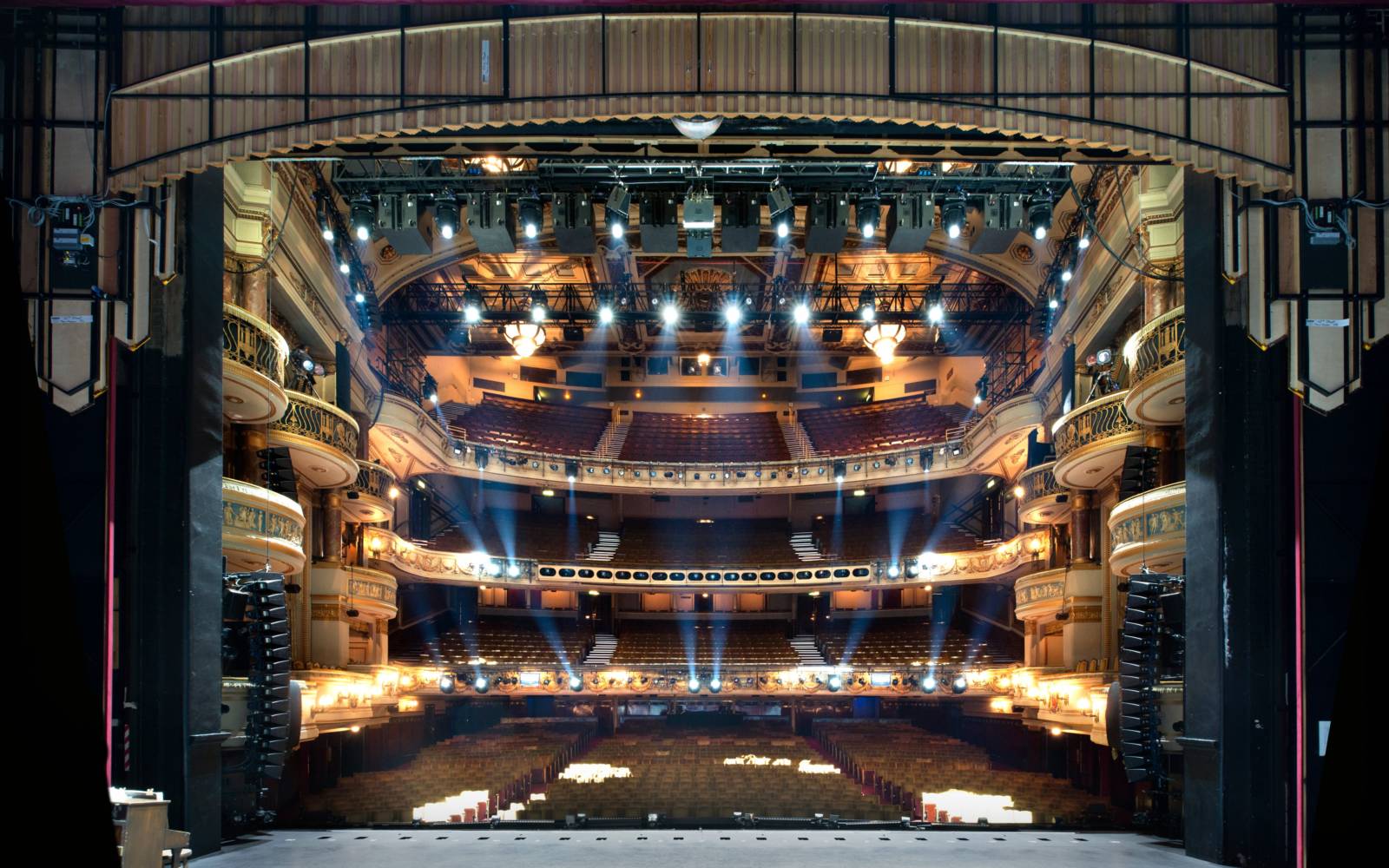 And he also revealed that his theatrical division, LW Theatres, has used the opportunity occasioned by the shutdown to actually do refurbishment work to it venues. He commented, “We were able to do work on the theatres, which you can’t do when there are shows running”. According to Curtis, “he’s spent £6 million improving seating, dressing rooms and bars, strengthening the fly towers of Her Majesty’s and the Adelphi, and adding a total of 168 (mostly women’s) toilets to his venues. A further £7 million was spent turning the Gillian Lynne into the modern, flexible theatre it was always meant to be.” All of that is in addition to the £45m overhaul of the Theatre Royal, Drury Lane (whose auditorium, pre-refurbishment, is pictured above in 2019), which will now be a jewel not just in his empire, but the entirety of the West End.

I can’t wait to get there to see the opening of Frozen, a musical I’ve tracked ever since it first opened in Denver (I was at the first night there in September 2017, when I reviewed it here, and again at the Broadway opening the following March, when I reviewed it again). As I wrote of the change in scale of those two venues,

“Premiering in Denver last summer, in a 2,800 seat performing arts centre, Disney’s Frozen – the musical adaptation of the hit film – transfers to a more intimate 1,700 Broadway house. On this comparatively smaller stage, its lavish effects (including the instant creation of giant ice bridges and palaces by designer Christopher Oram) have an even bigger impact.”

I caught up with Grandage on an hour-long zoom call with him the other day in Cornwall, where he and his partner Christopher Oram have been hunkered down since last March, before he begins shooting a new film in April. So he’s hardly been idle during the successive lockdowns — and he and Christopher also have acquired a new addition to their family: a rescue dog.

Frozen could be just the ticket to rescue the West End when it finally re-opens for business.