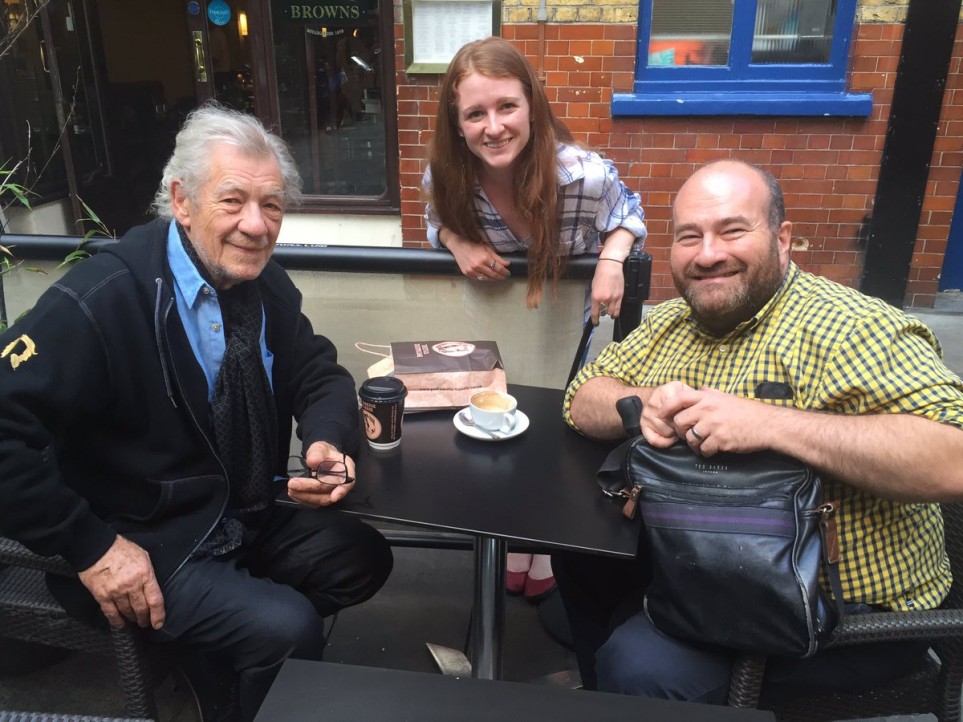 NEWS HEADLINES OF THE WEEK

The best two bits of news of the week came not via press releases but via Twitter. 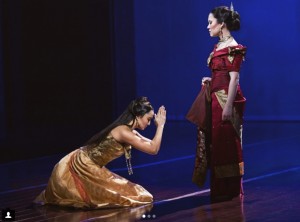 First and most thrillingly of all, Ruthie Ann Miles returned to her 2015 Tony Award winning role as Lady Thiang in The King and I last Friday (August 4), a day short of five months after a terrible accident that occurred as she was crossing a street with her 4 year old daughter Abigail near her home in Brooklyn.  Abigail died — and Miles, who was 8 months pregnant at the time, subsequently also lost her unborn child. (The friend she was out walking with also lost her 1 year old son).

Miles was originally announced to reprise her role in London; she was billed in the programme as sharing the role with Naoki Mori. Many critics, as I reported here for The Stage, failed to notice this job-share, and credited Miles for Mori’s performance in their reviews — no doubt causing additional stress and distress for both. As I wrote last month, “There has clearly been a communication failure. Both actors are listed online and in the programme. Plus, given the double casting, the press agent for the show might have made critics aware of who was playing the role on the night.” 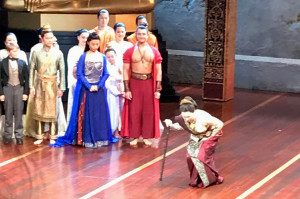 But last weekend all that was history as Miles — supporting herself with a cane — returned to the role triumphantly (pictured at her curtain call, right). As her co-star Kelli O’Hara tweeted the next day, “Last night, our friend @RuthieAnnMiles was a triumph in @KingandIWestEnd. Every moment was a gift and continues to be. She is singing like an angel and commanding the stage with a heavenly force. An inspiration to all. I knew you would want to know.”

Last Saturday, Ian McKellen gave an impromptu onstage Q&A to the audience who had actually come to see him play King Lear at the Duke of York’s when he had a minor accident en route to the theatre. McKellen tweeted yesterday what had happened….. but he’s now back on his feet (he managed to do the evening performance, with the help of a walking stick). 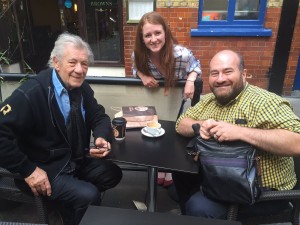 I am reminded of the time I interviewed him two years ago for The Stage, during his last London stage run in Pinter’s No Man’s Land at Wyndham’s. He insisted on doing it outdoors, in the little thoroughfare that runs between the stage doors of Wyndham’s and the Coward, so he could smoke as he drank his coffee; and we were regularly interrupted by people wanting to say hello or take a selfie, who were politely told we were working. Until one person stopped in front of me and said: “Are you Mark Shenton? I’m such a fan!” Then she spotted Ian…. and duly got her selfie (above)! (When she left us, I assured him that I had NOT set this up, as he drily chuckled).

The most exciting news of the week from Broadway, meanwhile, is that Rosemary Harris — now 90, going on 91 — is taking over from Diana Rigg in My Fair Lady from September 11, as Henry Higgins’ mother Mrs Higgins.  As British director David Leveaux — not connected to this show — tweeted in response to me when I linked to this news, “This is a brilliant idea. We all have our personal versions of great actors. Rosemary Harris is mine.”

OPENINGS OF THE WEEK

In London:
* Home, I’m Darling, Laura Wade’s first new new play since her 2010 hit Posh and directed by her long-time friend and collaborator Tamara Harvey, transferred from Theatr Clwyd (where some critics, including me, saw it) to the National’s Dorfman. As Paul Taylor put it in a 4 star review for The Independent (https://www.independent.co.uk/arts-entertainment/theatre-dance/home-im-darling-national-theatre-review-katherine-parkinson-it-crowd-a8472526.html), “It’s a sharp, funny and sad dissection of a doomed attempt to achieve marital bliss by retreating into a delusional cocoon.” 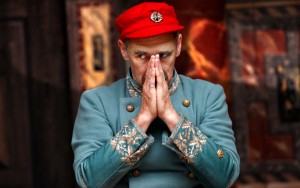 Othello, marking the return of Mark Rylance (right) to Shakespeare’s Globe that he was the first artistic director of, opened on August 1, in a production directed by his wife Claire van Kampen, opposite  André Holland in the title role (star of the surprise Oscar winner Moonlight — a surprise not least to the producers of La-la Land who had already taken to the stage to collect their Best Picture Award when the true winner was revealed). As Dominic Cavendish said in his four star review for the Daily Telegraph, “Rylance declares from the moment he first strides quickly on, in red cap, turquoise tunic and furtive, restless air, that he knows  every inch of this exposed stage…. Rylance is a great Shakespearean actor because he refuses to be the great Shakespearean actor. His manner is often daringly offhand, he falters across lines, at times plays the fool. He weaponises that customary gentleness of his so that Iago isn’t an overt schemer, even in his soliloquies; his motivation is a mystery even to himself. ”

* The Importance of Being Earnest, the final production in Dominic Dromgoole’s Classic Spring Theatre Company season of Oscar Wilde plays, opened at the Vaudeville on August 2. Reviews ranged from two stars to four stars: on the one hand, Natasha Tripney wrote in The Stage that Michael Fentiman’s staging “has all the subtlety of a meat tenderiser. It’ll sell well, no doubt, but it’s a clunker of a production”, while Ben Lawrence concurred in another two star review in the Daily Telegraph that the production is “as subtle as concrete”. On the other hand, Christopher Hart in the Sunday Times — while getting hot and bothered, as usual, about male-on-male kissing — dubs it “a comic and energetic delight” in a four-star review. He does, however, complains about the negligent consumption of food in the production: “They devour muffins like they’re gobbling down fast food before running for a bus. No Victorian gentleman would eat a muffin like this, let alone a dandy and aesthete in a smoking jacket. Lamentably, nowadays many young people don’t even know what a proper muffin is: they think it’s a disgusting sugary bun containing blueberries. O tempora o mores.” 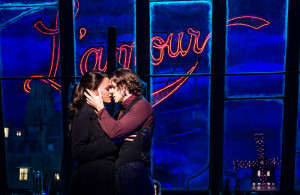 My review for The Stage is here, in which I write, “If we must have jukebox musicals, I only wish they were all as vivacious and utterly exhilarating as this. Moulin Rouge feels operatic in the high stakes it sets up; Luhrmann’s own version of Puccini’s La Boheme was a Tony winning Broadway hit in 2002, and this has a similar vibe. The polish with which it is all executed makes for a breathtaking spectacle.” (I have immediately booked — and paid — to return this Wednesday for another helping).

In the New York Times, Ben Brantley concurred, writing, “The jukebox has exploded.
Its pieces zoom through the air like candy-colored shrapnel, whizzing by before the memory can tag them and making the blandly familiar sound enticingly exotic. I’m talking about the recycled pop hits, mostly of a romantic stripe, that make up the seemingly infinite song list of Moulin Rouge! The Musical. By the end of this smart, shameless and extravagantly entertaining production, you’ll think you’ve heard fragments of every Top 40 song of lust and longing that has been whispered, screamed or crooned into your ear during the past several decades. You may even believe that once upon a time you loved them all.”

A Broadway transfer is yet to be announced — though, having spent a reported $28m on bringing it to the stage, that is a certainty. But complicating matters is the fact that the same lead producers Global Creatures are also this autumn bringing a stage version of King Kong to Broadway — and they won’t want to compete with themselves in next year’s Tony Awards. So the plan is that it will transfer next summer. 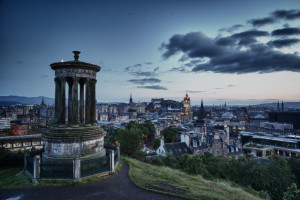 This year’s Edinburgh Fringe formally kicked off last Friday (what is traditionally called Week 0), and with 3,548 shows to choose from, it’s more daunting than ever for audiences and critics alike, who will only get to a tiny fraction of these. I’m relieved I’m NOT there, as it becomes very tiring fending off the endless requests to see shows.

But even finding myself over 3500 miles away, I am not, it seems, immune — as well as still getting lots and lots of e-mails and twitter messages, I’m also getting pleas from performers (and parents of performers, on more than one occasion) to see what influence I can wield on getting them covered.

My answer is simple: I have none. Publications I write for have dedicated teams up there, who have already been allocated what they will be reviewing; if they are not on the list now, it’s too late.

I had to remind one performer, too, that there are over 3.5K shows to get around; he was writing to me after day 3 of week 0 wondering why the big publications had not yet been to see his show. But when you’re a performer in Edinburgh, there’s an (understandable) sense that you are at the centre of the world and it is spinning around you and only you.

COLUMN OF THE WEEK 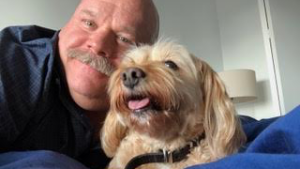 Broadway actor Kevin Chamberlin (right) posted a fantastic article on starring now in Wicked on Broadway at the same theatre, the Gershwin, where he had seen his first Broadway show, the original production of Sweeney Todd, when he was just 15 and on a high school trip from South Jersey to New York, when the theatre was originally called the Uris.

As he recalls it, “I sat in the house right mezzanine, frozen in concentration as I witnessed Angela Lansbury and Len Cariou give their brilliant performances as the cannibalistic meat-pie shop owner and her murderous, vengeful lover.
I could barely move when the lights came up. (I remember very vividly having a pounding headache.) All I could think was “I’m a chubby, closeted drama nerd. Who would ever cast me in a Broadway play?” As the cast bowed and the house lights came up, I was paralyzed. An intense, overwhelming feeling of focus and determination came over me that night. I realized I belonged up there, and at that moment, I made up my mind. Nothing would stop me from getting on that stage. And today, as I prepared to make my first entrance, a chill went up my spine, as it does eight times a week. I glanced up at the mezzanine seat I sat in almost 40 years ago—and thanked the theater gods for making my dreams come true.”