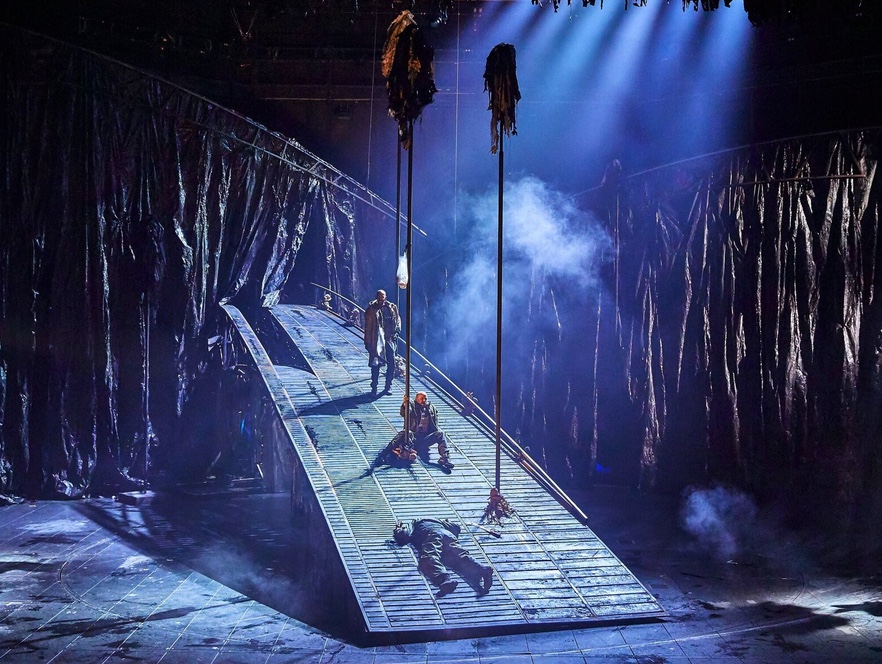 A busy week in London, but I’m out and about in the regions, too, with trips planned to Southampton (to catch the current tour of Miss Saigon), Milton Keynes (Fat Friends – the Musical) and Manchester (to attend the Manchester Theatre Awards, at which I have been invited to present one of the awards). I will also be paying a social call to Cambridge (but not for theatre — to celebrate Mother’s Day at my brother’s house there with our mum!) Plus I’ll be reviewing the first two of these three London openings (I have to miss Summer & Smoke as I’m having a minor surgical procedure that day!) 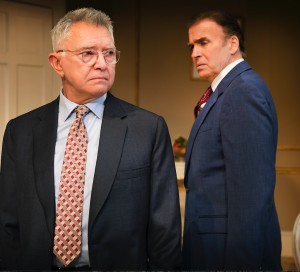 The Best Man, opening at the West End’s Playhouse Theatre following a regional tour, is Gore Vidal’s 1960 Broadway play that subsequently turned into a film in 1964, and has been twice revived on Broadway since — in 2000, with a cast that included Charles Durning, Elizabeth Ashley, Christine Ebersole, Spalding Gray and Chris Noth, and in 2012 with James Earl Jones, Angela Lansbury,. Eric McCormack and Candice Bergen, amongst others. This play about a ruthless campaign to gain the party’s nomination to run for US President always seems to be able to attract great actors, and this revival is no exception with a cast led by Martin Shaw (pictured on left above) as a candidate with a philandering reputation, and American actor Jeff Fahey (pictured on right above) as an ambitious and populist newcomer who is also in the running. The cast also includes Jack Shepherd, Glynis Barber, Honeysuckle Weeks and Gemma Jones, under the direction of Simon Evans. 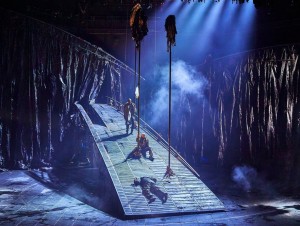 Macbeth, opening at the National’s Olivier, is directed by the theatre’s artistic director Rufus Norris in his first Shakespearean production for 25 years. Rory Kinnear plays the title role with Anne-Marie Duff as Lady M. Presented under the Travelex banner, in which hundreds of tickets are sold for every performance for just £15, it will also be broadcast live as part of NT Live to cinemas worldwide on May 10. Interviewed over a year ago about his plans at the NT by Whatsonstage, he spoke of his plans to direct this play, saying ,”I haven’t focused on his work or on classics generally partly because there have been so many great directors who have done it and I am drawn to the new, to the great writers of the future.” But he decided to reactivate a plan he’d once had to stage this play in New York for Roundabout Theatre Company with Kinnear and Duff here, and said that he planned to “sit down in the room with the two of them [Duff and Kinnear] and with an expert who really understands, in all the ways that I don’t, what that play is, so we can just go line by line.” No doubt that has now happened, and the results will be unveiled tonight.

Summer and Smoke, opening at the Almeida, is a play by Tennessee Williams that premiered on Broadway in 1948. Its latest London revival is directed by Rebecca Frecknall, who was previously on the Almeida Resident Director Scheme and has worked as Resident Director on the Almeida’s productions of Ink and Albion. The cast includes Patsy Ferran Nancy Crane, Forbes Masson and Matthew Needham. 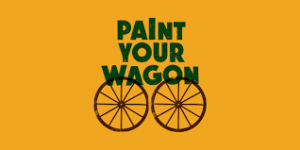 The big regional openings of the week are Paint Your Wagon, the 1951 Broadway musical by Lerner and Loewe opening on Wednesday March 7 at Liverpool’s Everyman, directed by artistic director Gemma Bodinetz as part of the Everyman Company’s series of ensemble productions; and The Cherry Orchard, in a new adaptation by Rory Mullarkey that will be directed by Michael Boyd, opening at Bristol Old Vic on Thursday March 8, that is being co-produced with Manchester’s Royal Exchange where it will play next. 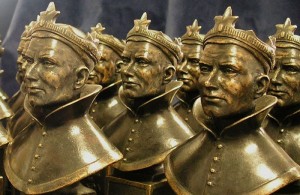 The nominations for this year’s Olivier Awards will be revealed on Facebook Live today by Elaine Paige and Alexandra Burke from 1pm. To view, visit https://www.facebook.com/OlivierAwards/videos/1740199849375865/ The actual awards will take place on April 8 at the Royal Albert Hall.

Closing tonight are The Exorcist at the Phoenix (see my review for londontheatre.co.uk here and All or Nothing– the Mod musical at the Arts, but the latter will transfer to the West End’s Ambassadors, for a 10-week run from March 28 to June 2.

1) Mary Stuart — Duke of York’s. First seen at the Almeida in December 2016, director Robert Icke’s extraordinary production of Schiller’s German classic Mary Stuart has now transferred to the West End, with Juliet Stevenson and Lia Williams (pictured above) reprising their phenomenal turns alternating from performance to performance in the title role of the Scottish Queen and her adversary the English monarch Elizabeth I. Both Stevenson and Williams made early bids for theatrical stardom when they transferred from the Royal Court in the original London productions of Death and the Maiden and David Mamet’s Oleanna respectively in the early 90s to this same theatre. Now they’re on the same stage again together, in one of the fiercest, finest display of acting talent in town.

2) Girls and Boys — Royal Court Theatre. Carey Mulligan performs Dennis Kelly’s extraordinary monologue Girls and Boys (running to March 17 only). In my review for londontheatre.co.uk, (https://www.londontheatre.co.uk/reviews/review-girls-boys-starring-carey-mulligan-at-the-royal-court), I wrote, “It’s one of those plays where you could hear a pin drop as the audience collectively holds its breath for the dread moment when our suspicions will be confirmed….It’s not a comfortable play to watch – yet it’s impossible to look away. It is one of the acting achievements of the year so far.”
3)

The York Realist — Donmar Warehouse. This tender, beautiful, aching story of unrequited gay love in 60s Yorkshire is given a tender, beautiful, aching revival by director Rob Hastie in a co-production with Sheffield’s Crucible that he runs and where it will play after its Donmar season ends on March 24. In my review for londontheatre.co.uk here, I wrote that the play “may very well be a contemporary classic, but it doesn’t advertise itself as such. It’s one of those beautiful, tender, understated plays that works entirely by stealth; there’s no great dramatic revelation or pay-off, just a quiet accumulation of detail and suppressed emotions as we follow the budding relationship between a young Yorkshire farmer (still living at home with mum) and the assistant director of the York Mystery Plays that he’s signed up to appear in.”
TOP THREE MUSICALS 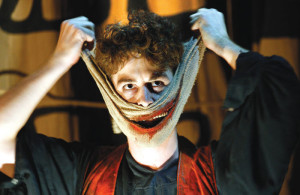 The Grinning Man — Trafalgar Studios. First seen at Bristol Old Vic in 2016, this is one of a slew of new British musicals that have made their way to the West End recently, as I wrote in The Stage recently. Now playing at the Trafalgar Studios, co-producer David Adkin told me, “It’s probably the riskiest thing in the West End – but sometimes you have to take a risk, otherwise the dynamic of the West End becomes quite dull.” You can watch an exclusive preview of David Bedella singing Labyrinth from the show here (though he’s not in the cast!): https://youtu.be/BqHytho0aiE

Girl from the North Country — Written and directed by Conor McPherson, this is a jukebox show with a difference, embedding a play set in 1930s Depression-era America with a soundtrack of wonderfully performed Bob Dylan songs.  Originally premiered at the Old Vic last summer, I wrote in my review of its transfer now to the Noel Coward Theatre in my review for londontheatre.co.uk that “it feels like a bona fide gem in a world of costume jewellery. Conor McPherson provides an intricate and precise yet impressionistic account of these lives unfolding, with big and small dramas playing out there.  Not since Once — the stage version of the Irish indie film — have I felt a show move with such organic vitality; the songs emerge from the action as a swirling, fluid commentary on it, though not specifically to further the dramatic action.”

3) Pippin — Southwark Playhouse. Long one of my favourite musicals, this 1972 Broadway musical gets a wonderful new production that has transferred to Southwark from a run at Manchester’s Hope Mill Theatre last year. In my review for londontheatre.co.uk here I wrote,”While I loved the 2013 Broadway revival for its extraordinary circus thrills, this unmissable production has even more integrity and dramatic conviction.”