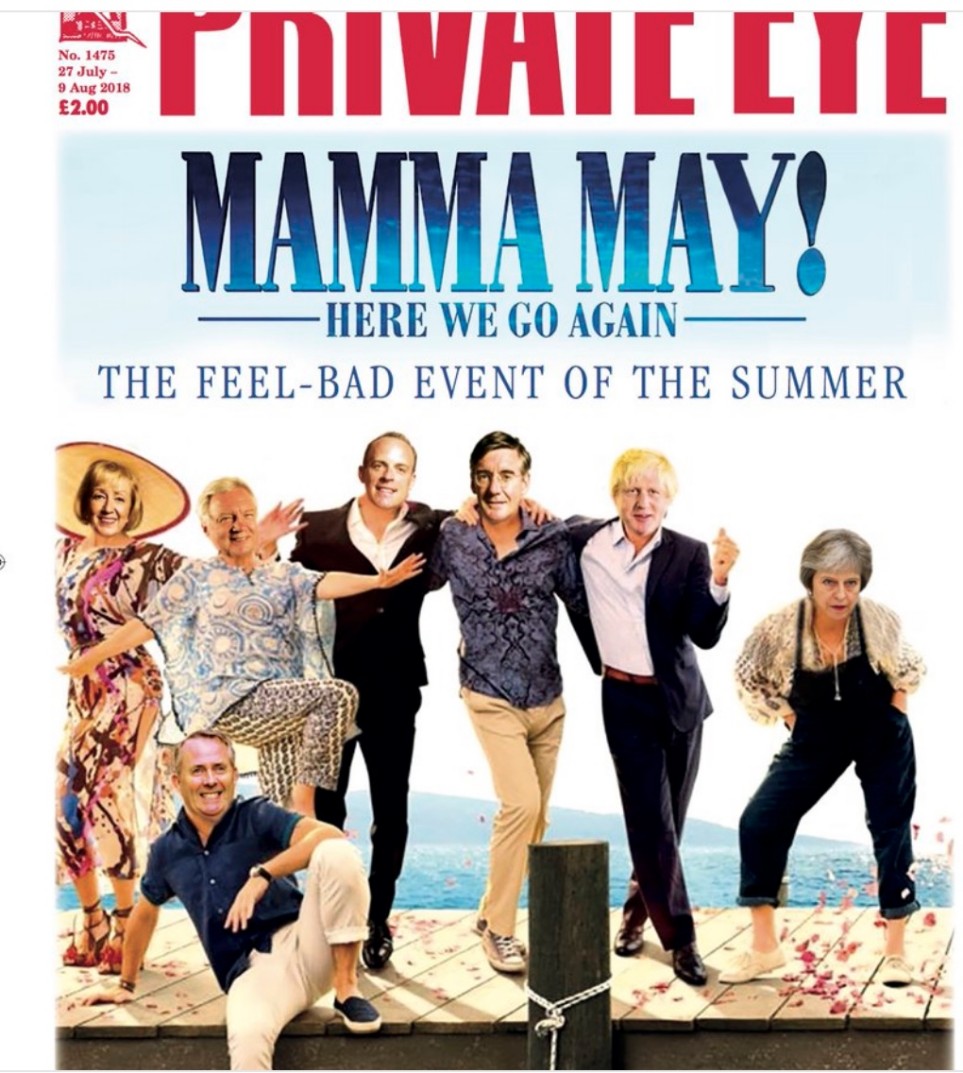 I may be away in Provincetown, but I’m still tracking the news back home and on Broadway — and occasionally making it, too! 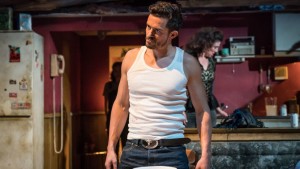 A friend of mine attended last Thursday’s matinee of Killer Joe, starring Orlando Bloom, in the West End. And he reported an incident that took place during the show, which I duly tweeted.

It quickly gained traction — not just on Twitter, but in the lazy world of manufactured news and outrage, multiple news outlets, from The Times and Telegraph to the Daily Mail, breathlessly reported it, with the Mail amongst those to rather childishly censor it as they quoted it (headlining their story: “Orlando Bloom ‘stops theatre performance TWICE as he furiously demands audience member puts their iPad away in foul-mouthed rant’.”)

What they neglect to mention is that it was done entirely in character: Orlando Bloom is playing the foul-mouthed (and fouler actioning) killer cop of the title. So it was entirely appropriate — even if the use of an iPad in the show was entirely inappropriate. Even if, as some claimed, the offender was only using it to recharge her battery-powered fan.

OPENINGS OF THE WEEK IN LONDON

While the National offered a new production of Ionesco’s absurdist play Exit the King that opened on Wednesday (July 25), another exiting monarch King Lear transferred from Chichester’s Minerva Theatre (where it premiered last summer) to re-open at the Duke of York’s on Thursday (July 26) with Ian McKellen reprising what may be his valedictory stage appearance in the title role.

And while Hamilton continues its sell-out run at the Victoria Palace, an off-Broadway spoof version called Spamilton transferred from Off-Broadway to the Menier Chocolate Factory. where it opened on Tuesday (July 24). 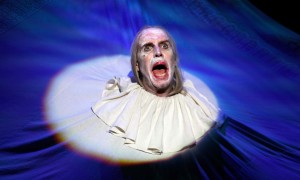 Exit the King (left) got lots of contradictory reviews, from one to four stars from the national press. The West End Whingers were in agreement with Quentin Letts in the Daily Mail, both of whom attended preview performances, at the one-star end. Letts took the opportunity to bash artistic director Rufus Norris once again, declaring “Some theatre directors have a knack for creating hits. Rufus Norris, boss of the Royal National Theatre, has the opposite.  He is a one-man conveyor belt of stinkers.”

King Lear predictably fared better, though it was interesting to see that in The Stage, where I had given it a five-star rave at Chichester, it emerged with a far more muted three stars. Tim Bano writes, “Intimacy and intensity sold audiences and critics on Ian McKellen’s King Lear in Chichester last year. Jonathan Munby’s regal production was squished into a 240-seat space. But here in the West End, in an auditorium almost three times bigger than Chichester’s Minerva, and now with added pomp, some of that is lost.”

Spamilton, meanwhile, seems to have left the uninitiated somewhat perplexed: in the Sunday Times, Thomas W Hodgkinson quoted a man next to him saying, “If you haven’t seen Hamilton, you’re f*****.” And then he admitted, “Not having seen Hamilton, I sat through Spamilton deadpan, aware of the mirthfully shaking shoulders of those on either side of me, while I tried to work out what the hell was going on… If you’ve seen Hamilton, you’ll likely love Spamilton. If not, well, what the man said was true.”
OPENINGS OF THE WEEK IN NEW YORK
There were three major openings in New York this week: two were musicals, one on Broadway (Head over Heels at the Hudson Theatre on Thursday), the other off Broadway (This Ain’t No Disco at Atlantic Theater on Monday), both of which I reviewed for The Stage here and here.

I am yet to see the third opening: Straight White Men, a transfer of a play previously seen in New York at the Public to the Helen Hayes, where it opened on Monday, which marked the first play by an Asian-American women to be seen on Broadway. I wrote a column for The Stage earlier this week on the glass ceilings that are still being shattered by diverse theatre makers.
OTHER HEADLINES OF THE WEEK

* Delfont Mackintosh Theatres have announced further refurbishment plans for their playhouses, which are already amongst the smartest and most beautiful in the West End. But Cameron Mackintosh is never one to rest on his laurels. Further restorative work, including strengthening and extending the life of the ceilings, has now been identified as being necessary; “this will necessitate that four of our five playhouses, all designed by the great Edwardian architect William Sprague, will each need to close for a period of two to four months to complete the necessary works within the next three years.” Work at Wyndham’s will commence shortly; it is already dark, pending the arrival in October of Florian Zeller’s The Height of the Storm, with Jonathan Pryce and Eileen Atkins. 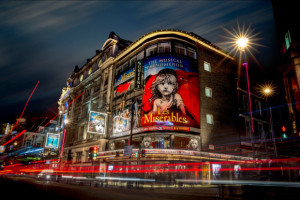 Next year work will be done on the Coward and Gilegud; with the Queen’s to follow, but the latter will require Les Miserables to relocate. According to the release, “Les Miserables continues to play to 95% capacity in its 33rd year. This theatre also requires a major renovation backstage.  It has had little refurbishment since reopening in 1959 after bomb damage from the Second World War destroyed the entire Front of House and rear Auditorium.  As the extraordinary run of Les Miserables looks set to continue for many years to come, the closure will also allow an opportunity to restore Sprague’s original boxes and loges as well as improving other facilities.”

I wonder if it it will also “allow” producer Cameron Mackintosh the opportunity to close the original production here and re-open the new touring version he now prefers instead.

In his own statement on the work, he stated, ““Having just completed the hugely rewarding but very expensive restoration of the Victoria Palace, news of the timing of these works which are necessary to ensure that my other theatres will be in tip top condition for actors, producers and audiences, long after the final curtain has dropped on me, was not the most welcome.   There are major financial consequences, not just the considerable cost of the capital works, but the knock on costs of closing these theatres for several months will run into many millions of pounds. However, I love these buildings and luckily my success as a Producer has given me the resources to preserve their life for another 100 years – so that the show can go on and on and on!” Bravo to that! 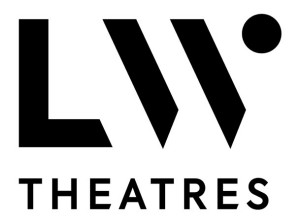 Meanwhile, Andrew Lloyd Webber’s rival Really Useful Theatres chain has announced a re-branding exercise: the venue division, which owns six London theatres and co-owns a seventh (the Adelphi, with the Nederlander Group), is being renamed LW Theatres. According to the release, “The name change is designed to end any confusion between the theatre division and the Really Useful Group (RUG), which handles Andrew Lloyd Webber’s creative output.”  Rebecca Kane Burton, the Managing Director of LW Theatres, added, “The change will help the theatre company communicate directly and more effectively with a wider public and the business world.”

* We’ve had lots of stories recently of heroic understudies rushing to the rescue of shows, as when leading man Tim Howar’s wife went into labour during the first preview of Chess at the Coliseum in April and his understudy — who had not yet rehearsed the role officially — took over for the second half of the show; and in June, an understudy from 42nd Street was rushed over to the Novello next door to take over the lead in Mamma Mia! mid-performance when no one else was available for a role she had previously played.

On the first night of Me and My Girl at Chichester a couple of weeks ago, Ryan Pidgen had to step in at short notice for lead Matt Lucas, as I wrote about in a column for The Stage here. But the Arts Theatre may have the best story yet: Jennifer Caldwell, who was working in the box office there, was called to step into the show playing there Knights of the Rose. She told Whatsonstage,”I was working on the box office when my manager Brian (who is also a producer on the show) took me aside and asked if I could do a cut version of the show if I had a few hours rehearsal. Racky [Plews, the show’s director] and the wonderful company then came in, I rehearsed for two hours and I was on. It all went very quickly and was a bit of a blur really. Everyone backstage, onstage and front of house could not have been more supportive.”

INTERVIEWS OF THE WEEK 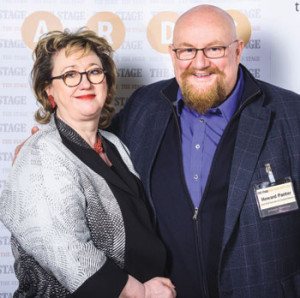 In The Stage, Howard Panter and Rosemary Squire –pictured right, who co-founded Ambassador Theatre Group, building it up from just one theatre (the Duke of York’s) into Britain’s largest theatre chain — are interviewed by editor Alistair Smith, on the “the huge culture shock” of going from being the biggest kids on the block to being the new kids on the block again as they now reveal ambitious plans to grow their new Trafalgar Entertainment brand.

They’ve started again with one theatre — the Trafalgar Studios, part of the settlement they acquired in their ATG divorce — and bid for the Haymarket (but lost out to Leonard Blavatnik’s Access Entertainment, who paid more than £45m for it). Squire admits, “It’s no secret that we bid for the Haymarket, Who didn’t? But it’s hard to compete when someone’s not looking for a return on it…. I think the pricing of the Haymarket was different [from other West End theatres], because that theatre is a jewel. It’s beautiful and I can understand why someone would pay that much. It’s like having a beautiful painting. Whereas I think with a lot of theatres – less attractive theatres that don’t have ‘curb appeal’ – it’s different because you are looking at a business, not a beautiful trophy.”

They’re also producing the West End transfer of The King and I ahead of a UK and international tour, and also have transfers lined up for the National’s Nine Nights and the Bush’s Misty to the Trafalgar Studios. And they’re looking to revive their interest in panto, to compete with Qdos; and they reveal that they may yet buy back ATG, if and when its current private equity owners put it up for sale. “ATG is a great business. Obviously as a shareholder I hope it will go for the highest price. But yes, of course we would look at it.” 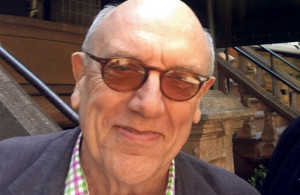 Also in The Stage, my interview with playwright Mart Crowley, now 82, that I recently did in New York is here. He wrote The Boys in the Band, currently being revived on Broadway which I reviewed for The Stage here, fifty years ago; this week, a subsequent play he wrote For Reasons that Remain Unclear is receiving its British premiere at the King’s Head.

MAGAZINE COVER OF THE WEEK

Private Eye get full marks for their cover spoofing the release of Mamma Mia! Here We Go Again. 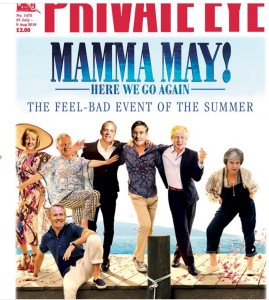