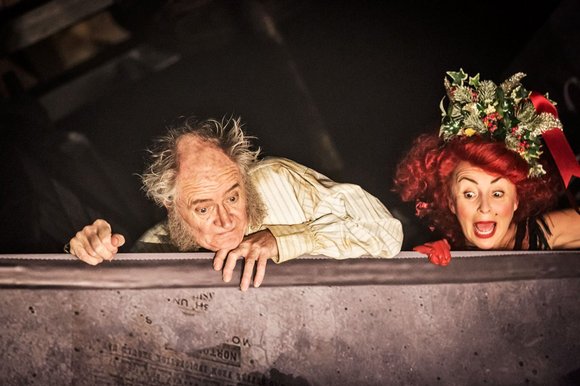 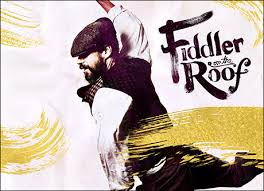 During previews, view the revival of Fiddler on the Roof has ignited some controversy for its new framing device that director Barlett Sher introduced, remedy featuring a bareheaded Tevye (played by Danny Burstein, pictured above) in modern clothing at the show’s opening, and at the end, “an inescapable visual nod to the current global refugee crisis”, as the New York Times put it in a preview feature.

Lyricist Sheldon Harnick, the last surviving member of the original creative team, had a right of veto. He was, he told the New York Times, ultimately persuaded to allow it, saying: “To my surprise, it had an extraordinary reaction from a significant part of the audience that finds it very moving,” he said in an interview. “They’ve written letters to the producer, they’ve told the cast, they express great emotion.”

The controversy, suggests Alisa Solomon, who has written a cultural history of the show, is quoted saying, “People generally have deep attachments to musicals, and to how they remember them, but Fiddler has that quality more than any musical that’s ever existed, because of the force it had, particularly for Jewish Americans, in the middle of the 20th century. In some ways, there is more flexibility for Jews regarding Jewish ritual itself than there is with Fiddler on the Roof.”

Reviewing its December 20 opening, Charles Isherwood draws out this production’s contemporary relevance and resonances in the New York Times:

The sorry state of the world gives us new reason to appreciate the depth of feeling so powerfully, so ingeniously embedded in Fiddler on the Roof… that has returned to Broadway at a time when its story of the gradual disintegration of a family, and a community, strikes home with unusual force…. This multihued staging moves to a heart-stopping conclusion. It’s impossible to watch the people of Tevye’s town, Anatevka, marching toward their unknown destinies in the shadow of a threatened pogrom without thinking of the thousands of families fleeing violence in the Middle East and elsewhere today….

The buildings of Anatevka sometimes hover above the stage, and as the production progresses they grow smaller; we seem to see them from a greater distance. By the climactic tableau they have disappeared entirely. All we see are people in transit, carrying the few possessions they can bring with them, moving with a weary but steady gait into an unknown future, an image that might have been taken from the front page of a newspaper on almost any day this year.

In Time Out New York, David Cote also draws eloquent modern parallels: “Modern love struggles with ancient custom, as disaster looms in the wings. In the end, as Anatevka’s denizens are seen leaving in silhouette—and Burstein’s man in a red coat returns to take his place with them—you may glimpse a darker angle on tradition. It’s not just the sacred rituals that hold families and villages together: The global, human tradition is this: Exile, displacement, homelessness.” 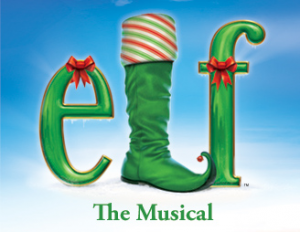 A pair of Christmas musicals have returned to New York for short Christmas seasons — Annie and Elf. And reviewed side-by-side, their current NY homes are part of the charm (or lack thereof) of each. In the New York Times, Alexis Soloski writes:

You could hardly blame that little scamp Annie for gushing. The refurbished Kings Theater in Brooklyn is a very nice place for a touring company of Annie to park itself for the holidays. An evening spent in these lavish Art Deco environs, where hardly a surface goes uncarved or ungilded, might make you sympathize with the tour of Elf: The Musical, now braving a winter engagement in the sterile confines of the Theater at Madison Square Garden.

Most of us, of course, don’t choose a holiday entertainment based on architecture.

But then she goes on to say of Annie,

The production gets a boost from its surroundings. Kings Theater is, depending on your architectural preferences, a triumph or a disaster of neo-Baroque style. But it boasts terrific sightlines and decent acoustics. It contrasts meaningfully with the scenes set amid tenements and hobo encampments, and is perhaps the only setting that could make Warbucks’s Fifth Avenue palace appear understated.

The environs of Madison Square Garden lend less to Elf, which seemed a little lost onstage, its sets flimsy, its good cheer not quite infectious.

She lets two “pretween” girls in the audience have the last word in her section on Elf, whom she overhears in the interval.

“Well, no one goes upside-down like in Mary Poppins,” one complained. 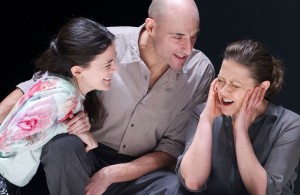 Nicola Walker, currently riding high starring on Broadway in A View from the Bridge (in which she is pictured left with co-stars Phoebe Fox and Mark Strong), price and being seen in two TV series at the moment — BBC1’s River, and ITV’s Unforgotten., interviewed by Rachel Cooke in The Observer:

On the apparently sudden recognition:

“It’s ridiculous, and very lovely. But I’m glad it didn’t happen when I was 21. I wouldn’t have been able to handle it. I felt very exposed by those two shows going out at the same time, and while it turned out OK, you’re always frightened someone is going to pat you on the shoulder, get you to sit down, and then tell you that you’ve had your go. When you’re working, you’re in the present, but you’ve always got one eye on where your next job might be coming from, and I don’t think that will ever go away. I’ve been doing this since I was 21. This is how I’m wired.”

On her admiration of her co-stars:

“Once you’ve sat in a room annoying Derek Jacobi while he’s trying to do his crossword, you’re prepped for working with the greats. But, yes, Unforgotten was a roll call of great British actors. I mean: Peter Egan as my father. Luckily, I managed to be very professional and not fan-girl him. At one point, Tom Courtenay did a 12-page scene in one take. When he’d finished, the room broke into spontaneous applause. He and Gemma Jones are utterly committed to their work, and they still love it, it’s really inspiring. They still really want to be there, and I have worked on things in the past where I wondered if that was the case for all the actors involved.”

NOMA DUMEZENI ON BELIEVING IN THE UNIVERSE 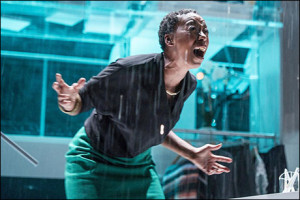 Interviewed by Liz Hoggard in The Observer on December 20 about taking over from Kim Cattrall in Linda  (pictured left) at very short notice, after working at the Globe and Almeida with the same director Michael Longhurst (the day after this interview appeared she was announced to be starring in next summer’s Harry Potter and the Cursed Child, playing the adult Hermione):

“I’m starting to believe in the universe right now, I really am. I’m in my late 40s, and if you look back things do happen for a bloody reason. I went to meet Michael because I saw Constellations which he directed. In the past I’d been so snobby about the Globe – you think: “Oh my God, it’s vast, how do you control an audience?” – but it turned out ’Tis Pity was in the Globe’s Sam Wanamaker theatre, warm and dry. And Michael offered me the part of Hippolita, a wronged woman and a baddie, and it was absolutely joyous. And later he offered me Carmen Disruption at the Almeida.”

CYNTHIA ERIVO ON COMING REALISE THAT DIFFERENT CAN BE BEAUTIFUL, TOO

Interviewed by Michael Paulson in the New York Times on December 22, Cynthia Erivo talks about reprising her London performance in The Color Purple on Broadway.

On her identification with the role she’s playing:

Over the course of the show, during which she ages from 8 to 50, Celie comes to see herself as beautiful, a journey that has parallels in Ms. Erivo’s own self-assessment.

“When I was 15, I didn’t think I was the prettiest at all. But then something happened when I was 20-something — I thought, actually, I really like what I look like. Just because I don’t look like everybody else doesn’t mean that I can’t be just as beautiful.” 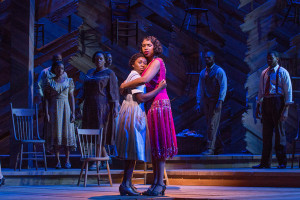 On playing the role in New York, in whcih she co-stars with Jennifer Hudson (pictured left):

Although she is not American, and is now playing a quintessentially American role, she said she felt at home with the cast and the material.

On her work-out regime and personal appearance, Paulson writes:

She is tiny (5 foot 1), muscular and stylish, with hair dyed blond, multiple ear piercings, and, on opening night, blue lipstick. She begins each day with green juice and a workout; she boxes, does yoga and rides a scooter, and then at night, she said, “I like to do four sets of 10 to 15 push-ups, then four sets of 40 mountain climbers, just to get the blood moving.” Ordinarily, she lifts weights, too, but she has taken a break while playing Celie to prevent bulking up. (“My body is one that kind of looks at weights and then all of a sudden I have muscle.”)

JIM BROADBENT PROVES NOT TO BE AN EASY INTERVIEW 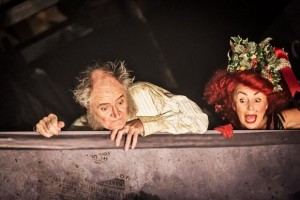 Interviewed by Tanya Gold in the Sunday Times about his current run in A Christmas Carol in the West End (pictured left with Samantha Spiro),  every journalist will identify with this: the courteous but reluctant subject.

Broadbent is not an easy interview, despite, or maybe because of, his courtesy. He answers gravely and giggles a lot, but I know even before he speaks that he would rather do pratfalls than talk about himself, and this makes him likeable, if impenetrable. He also wants to be interviewed with Barlow, his friend and collaborator of 35 years, so the “interview” is largely two grown men laughing and complimenting each other. They worked together as the National Theatre of Brent, where they would fight, as themselves, on stage, over who had the best costume and part. They do it for me now: “I thought I was playing that!” “What are you wearing that for?”

Broadbent says he was waiting “for something irresistible, and this was that. There are so many colours and shades — of joy and anger and fear and pain and nastiness and generosity. [There is] no other character I can think of with such a marked, glorious arc of story, from the depths of nastiness to the heights of glorious generosity. It’s wonderful.” But he can’t really go further, at least not as himself, and I hadn’t thought to ask him to do this interview as anyone else: “As soon as I start talking about it, I don’t really know what I am saying.”